In a very odd twist of events that have transpired since Monday, Netflix and Min. Louis Farrakhan have apparently had some type of disagreement regarding his new documentary. They’ve given two very different announcements to fans and now many are confused as to what really happened, including us.

On Monday, Farrakhan took to Twitter to let his fans know that his latest documentary, “My Life’s Journey Through Music,” would be premiering on Netflix on Wednesday, August 1, 2018:

@LouisFarrakhan: On August 1, watch the premiere of my music documentary “My Life’s Journey Through Music” on @netflix. 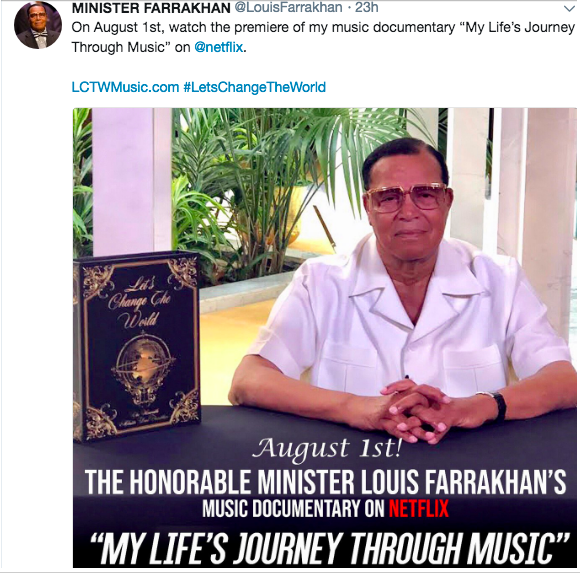 At that time, it seemed evident that there was a solidified release date set for the Netflix premiere and the civil rights activist seemed excited about sharing his highly skilled musical talents and his life’s work with the world, through Netflix’s platform.

Fans tweeted their anticipation in response to the minister’s announcement…then all of a sudden there was a resounding record scratch delivered to fans, by way of Netflix…

Damn near 24 hours after Farrakhan’s announcement, Netflix hit fans with a ‘Not so fast’ type of response. They released a statement via Variety, that was in direct contrast with the Nation of Islam leader’s statement. Within in it, the service offered an explanation, without really explaining much of anything at all regarding the cancellation:

A company spokesperson on Tuesday said that reports that the streaming service would add the documentary “My Life’s Journey Through Music” next month were the result of a communication error.

“This film will not be released on Netflix,” the spokesperson said. “Due to an internal miscommunication, it appeared to be scheduled for release on Netflix, but it is not. We apologize for any confusion this has caused.”

So all of the preparation, paperwork, and hype surrounding the Netflix Farrakhan documentary was simply the result of some type of ‘oops’ and they just caught it approximately 24 hours BEFORE it was to premiere on it’s platform? If y’all are confused about this, you’re not alone because clearly, Farrakhan was too, given his prior statement.

Since I was utterly confused about the sudden breakdown in ‘communication’ between Farrakhan and Netflix, I went into research mode to find the answer. After extensive research, what I’ve now found is that many websites have created their own theory about, without any factual proof to back their claims.

In a nutshell, many are blaming Farrakhan’s Netflix cancellation on a video post he tweeted, in June 2018, as the reason. In his video, Farrakhan spoke about “Thoroughly and completely unmasking the Satanic Jew and the Synagogue of Satan.”

Thoroughly and completely unmasking the Satanic Jew and the Synagogue of Satan.

Clearly, Farrakhan’s statement sounds extremely biased against all Jewish people. What I eventually realized, was that Farrakhan was referencing a Jesus quote from the Bible, that reads:

One Christianity site broke down that Bible quote and it’s surrounding statements in simple terms, which further explains Farrakhan’s reference- be it good or bad:

Via CGG.org: ‘The word synagogue comes from a Greek word meaning “assembly of men” or “congregation,” and it was used much like the English word “church.” The “synagogue of Satan,” then, is an assembly or congregation—a church—made up of the individuals who “say they are Jews, and are not.” The term “Jew” is used here in a spiritual sense.

Notice the apostle Paul’s definition of a spiritual Jew in Romans 2:29: “He is a Jew who is one inwardly, and circumcision is that of the heart, in the Spirit, and not in the letter; whose praise is not from men but from God.” In this case, it is not one’s physical race that counts, but his spiritual condition (Galatians 3:27-29; Romans 4:16). True Christians are spiritual Jews because Jesus says in John 4:22, “Salvation is of the Jews.”

Those in the “synagogue of Satan” say they are spiritual Jews—pretend to be real Christians—but are not. This false church was already developing in the days of the apostle John, masquerading as God’s true church.’

So, although we still do not know the true reason behind Netflix’s cancellation of Farrakhan’s documentary, could it be that the streaming service, which is largely owned by executives of Jewish decent, cancelled it due to his video? I guess only time will tell.