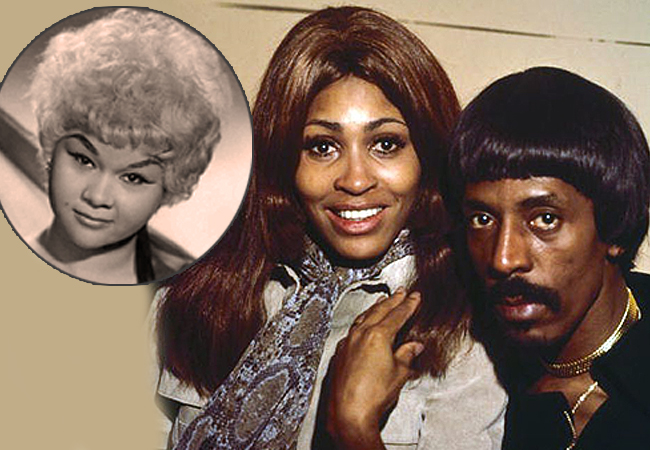 Etta James once revealed a story about the time she was performing and her friends, Ike and Tina Turner decided to stop by to pay her a visit and sadly, here’s what happened next according to Etta…

“Ike and Tina visited me in my dressing room after a performance. Tina said, ‘Look what Ike bought me.’ She loved showing off her wardrobe. I knew the clothes came from thieving women who were also in love with Ike but I didn’t say anything. Suddenly, Ike said he had some business to do and left. Tina said, ‘Look at this diamond Ike gave me,’ as she pulled the ring from her purse and started putting it on her finger. It was dazzling. When Ike came back, he took one look at the ring on Tina’s hand and without saying a word; he punched her in the face with a closed fist. Then he grabbed her hand and bent it back, and yanked off the ring, almost breaking her finger in the process. Her face swelled up right in front of me. I was shocked and horrified but before I could say a word, Tina was out of there.

[Source: “Rage To Survive,” by Etta James]
This doesn’t surprise us, given the violent history of Ike and Tina’s relationship, but it’s still sad to say the least. It’s evident that Ike had severe issues with women, issues that stem back all the way to his childhood. What he and Tina went through is just another example that it’s almost impossible to know how to genuinely love someone, if we are not healed from the type of conditional love, or lack thereof, that we may have experienced in our childhood. Broken children often mature into broken adults if they don’t get the help they need and deserve to heal the wounds and heartache that were passed onto them without their permission. I hope Ike Turner and Tina Turner were both eventually able to fully heal from their wounds and toxic relationship. From the looks of it, Tina has…but not quite sure if the late Ike Turner was ever fortunate enough to do so though.