LaWanda was Lynn’s big sister and they were very close. How they managed to keep that little known fact on the low for SO many decades is beyond me, but somehow they did. We suppose that if the internet existed back in the day, this news would have been all over. They wouldn’t have been able to stop folks from talking about it. Well, at least we know now and like we always say, we learn something new everyday around these parts. As you all know, Lawanda Page passed away in 2002 at the age of 81, but her legacy will continue to live on. She had us crackin’ up back in the day and we LOVE her for that.

So what has LaWanda’s sister, Lynne, been up to these days you ask? She had a recurring role on the legal comedy-drama, The Practice as “Judge Fulton” between 1997 to 2004. Nowadays, word on the Old School curb is that Lynne’s been living comfortably in California. She pretty much keeps a low key profile now and and is a very religious woman, who loves to spend time sitting on her meditation rock inside of her peaceful cactus garden. 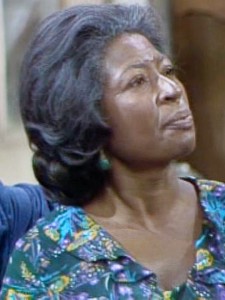 Lynn, like many other actors/actresses, was a vital part of a legendary TV show.  Sanford and Son spans across many decades and it’s still grabbing the attention of younger generations today. With that said, I doubt very seriously that Lynn has been able to spend her life going unnoticed in everyday society. Even at an older age, she probably still gets attention everywhere she goes almost 40 years since her last appearance on the show. I know one thing, a lotta folks would probably lose their minds if they were sitting in church and turning to see “Donna” sitting right next to them shouting “Amen!”

Ms. Hamilton is 85 years young now and she’s clearly taking great care of herself. Turn the page to check out an interview she did with her good friend and pastor recently…