OMG! Sister Sledge REFUSES To Let One Sister Sing w/Them For The Pope! 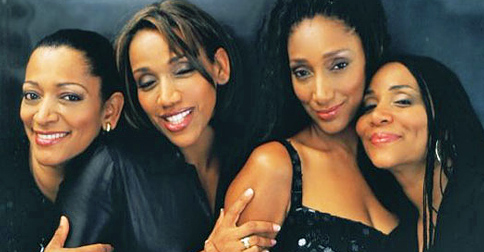 Well ILOSM family, it seems like we are family, but not Sister Sledge. The sisters will be performing for the Pope tomorrow and word on the Old School curb is that one Sledge sister ain’t welcome! That sister is Kathy Sledge, the one who sang lead in their most popular hit, “We Are Family.”
Sister Sledge is included in a line-up of several heavy hitter performers, including Aretha Franklin, for the Pope’s appearance at the World Meeting of Families in Philadelphia on Saturday (9-26). Some sources have reported that Kathy isn’t tryin’ to hear that and is determined to step on that stage and get her sing-on by any means necessary, so we shall see once the concert starts tomorrow.

The other three siblings, Joni, Kim, and Debbie allegedly don’t want Kathy anywhere near the stage when they touch it because they’ve been having issues with her periodically ever since 1989. You see, the family feud kicked off when Kathy informed them that she wanted to go solo in ’89, and according to an interview Kathy did with Yahoo, she said “They said: ‘If you do it [go solo], you gotta leave.’ They went out as a group on their own, and they had a photo shoot and didn’t invite me. And that hurt.”

Kathy also said that the tension between she and her sisters took an even greater turn for the worse when they slapped her with a lawsuit in 2013. She said “They tried to make it so that I wasn’t allowed to say I’m of Sister Sledge or from Sister Sledge. They thought it was a conflict.”

After spending a whopping $80,000 on the legal process, they settled the suit out of court.

Kathy revealed that she doesn’t speak to her sisters anymore and she doesn’t even see them on Christmas, which apparently used to be a definite time they would all see each other. So as it stands right now, only three out of the four sisters will be hitting the stage for the Pope on Saturday…unless Kathy decides to give them an unwanted surprise.

Hopefully everything turns out okay with these siblings, because we’re sure they love each other to the core, but it just seems that right now they don’t necessarily like each other…well, they don’t necessarily like Kathy and vice versa. It would be great to see all four of them on that stage together again though, so we’ll keep you posted on this and in the meantime we’ll keep our fingers crossed…but we won’t be holding our breathe for this reunion.
-ILoveOldSchooolMusic, old school news with a new point of view