R&B crooner, Eric Benet, is moe than just the man who graced us with classics like, “Spend My Life With You,” he’s a cat who isn’t afraid to speak his mind to the masses. That was on full display Saturday (8-12-17) as the horrific chaos in Charlottesville, Virginia was unraveling before the world’s eyes.

A Recap Of The Racist Fueled Chaos

In case you’ve been outta the loop for the past 24 hours, here’s why Benet is going off on social media: As we previously reported, violence and tragedy happened when a few hundred Ku Klux Klan, white nationalists, and neo-Nazi members (several who wore Trump’s “Make America Great Again” hats) were about to hold a rally in protest of Charlottesville’s plans to remove the statue of Robert E. Lee, the Confederate general and apparently a hero to the racists groups.

Before the rally could even start, counter-protestors (of many races) stood up against the White racists organizations and shut it down. However, all hell broke loose almost as soon as the two sides faced off at the rally site. Plenty of people fought, kicked, punched, and sprayed each other with various chemical agents.

A car -which police say was driven by 20 year old, James Alex Fields Jr.- then plowed into a crowd of those who were counter-protesting the racist rally, injuring 19 and killing one. Hours later, a a pilot and a Virginia state trooper were killed in a helicopter crash, as they were hovering over the riots to monitor the chaos.

Now, Eric Benet, like many others, is sounding off on the causes behind the racists events, much of which he feels is currently being sparked by Pres. Trump’s racially motivated political actions, tweets, and views. Check out the various tweets and re-tweets Benet has been posting in wake of the Charlottesville riots:

Then he questioned the typically specific tweeter, Trump’s, non-specific tweet about the Charlottesville riots… 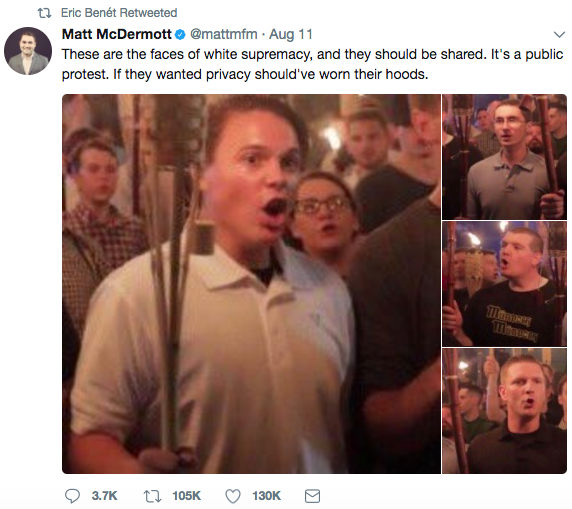 The frustration is definitely understandable and with so much hatred going on in the world, sometimes taking a minute to de-stress to an Eric Benet jam is just what we need. So we’ll leave y’all with these classic joints…then we’ll get right back on the heartless racists of America in a few…