Payback: Rick James Did Prince Dirty, But Prince Got Revenge On Him & It Was Epic

The rivalry between ‘Mr. Cold Blooded’ and ‘The Purple One’ started when Prince and his band were the opening act on Rick James’ tour. At that time, Rick was the bigger act, but allegedly Prince was added to the tour’s line-up  to boost ticket sales because Rick’s popularity was starting to suffer.

Prince opened for Rick James in 1980 and Killed the stage! This started the rivalry between the two. pic.twitter.com/Dz2H8e5PE1

Prince’s guitarist, Dez Dickerson, told biographer, Dave Hill, that “It was a rough period for Rick. We would go over like gangbusters, because the black audience was just dying for something new.”

Rick also began to publicly take shots at Prince, here’s what he once told Rolling Stone:

“I can’t believe people are gullible enough to buy Prince’s jive records. [Prince is a] a mentally disturbed young man. He’s out to lunch. You can’t take his music seriously. He sings songs about oral sex and incest.”

But Rick Didn’t Stop There… 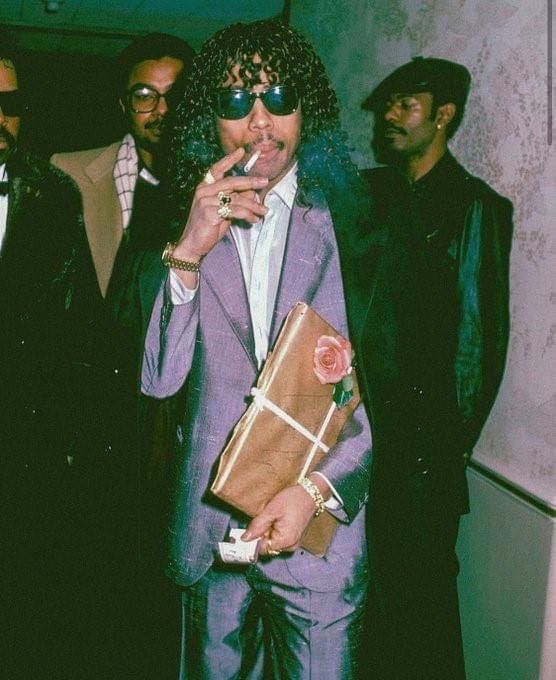 James even said Prince was jacking his performance style:

[Prince was] emulating my moves like a motherfu*ker. I know imitation is the sincerest form of flattery, but because my act followed his, it looked like Rick James was copying Prince rather than vice versa.”

Later, once Prince became famous, he refused to sign an autograph for James’s mother. It didn’t end well.

The you-know-what really hit the fan after Rick got tired of losing, and since many say he felt like he was losing to the new kid on the block, Prince, Rick handled it in a true Rick James-like fashion:

‘[According to Teena Marie, James got back at Prince by] allegedly stealing Prince’s programmed synthesizers and using them on his own 1981 album “Street Songs,” and then sending them back to him “with a thank-you card.” ‘

Now that was really “COLD-BLOODED!”

Peep How Prince Got The Ultimate Revenge…

He ‘Stole’ Vanity? Of course Prince was sitting quietly in the cut, plotting his payback at Rick, and he ultimately did the unthinkable- he stole Vanity. That’s right he stole Vanity from Rick, who was Rick’s artist at the time and was going to be the lead singer of The Mary Jane Girls.

After Prince called her up and persuaded Vanity to go on a date with him as his date to the American Music Awards, Vanity never looked back and became the lead singer of Prince’s girl group, Vanity 6, instead.
Rick later admitted to losing his to Prince:

“I always felt our competition was healthy, although I was jealous when he started getting big—more than jealous—I was pissed… because I felt his songs… and a lot of his stuff wasn’t real.”

Eddie Murphy and Prince were always cool, but when Eddie was looking to work on his album, which ultimately included his 80’s hit, “Party All The Time,” he first went to Prince. Eddie soon realized that working with Prince in the studio made him uncomfortable, so he asked his friend, Rick James, to help him. Rick eventually agreed because he said that “There wasn’t anything I’d rather have done than write a hit for Eddie — and stick it in Prince’s ear.”
[Sources: Rolling Stone; Pop Matters; Pitchfork]

As far as we know, this rivalry lasted until Rick’s James’ last days. The competitive nature that he and Prince had may have gotten out of line at times, but it also helped to push both of them to be the best artists/musicians they could possibly and as true Old School music fans, we’re eternally grateful to them for that.