Well, well, well, former NFL player, Ed Hartwell, moves pretty fast. Not quite sure if the ink is dry on his and Keshia Knight-Pulliam’s divorce papers, but the brotha wastes zero time when it comes to his love life, nor having babies.

Keshia and Ed finalized their divorce in April 2018, after a nearly 2 year tumultuous battle over custody of their 1 year old daughter, Ella Grace; paternity, and divorce issues. That was a time period that neither one of them enjoyed, to say the least. But now it seems that Ed has found a new love and she is VERY pregnant.

Ed’s new lady’s name is Tonya Carroll and she recently flooded social media with many happy photos of her baby bump. Unlike his prior union with Keshia, Ed is actually in a happy relationship with Tonya, during her pregnancy and they seem to be very in love. Check out her posts below…

As most of us know by now, both Keshia and Ed were hurling major allegations at each other throughout their marriage and quite frankly, both of them seemed at fault in one way or another. By the time little Ella was born, things were so bad between them that Ed was not present for her birth, nor did Keshia or anyone else from her family inform him she was going into labor. Fast forward to today and Ed is fighting against the primary custody that Keshia was recently awarded in their divorce finalization. He’s asking the judge to grant him more than the couple of visit days he gets each week with Ella. As far as we know, that request is still pending.
>h2>Fans’ Reactions

All of that marriage prior drama did not go unnoticed by many “Rudy Huxtable” fans, after Tonya shared their lovey dovey baby-on-the-way photos online. Many fans are now flocking to Tonya’s page to give Ed a piece of their mind and apparently send a warning to Tonya that he may leave her, just like he left Keshia. The comments were so lit, that even Ed’s cousin, @audr*******, jumped in to defend him… 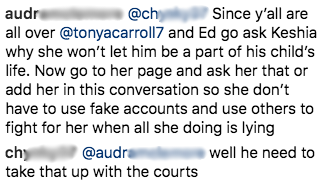 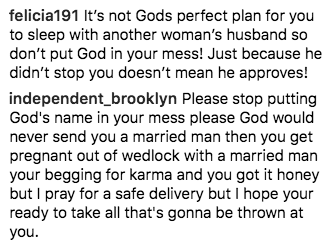 Word on the Old School curb is that this love thing between Ed and Tonya is not new. Reportedly he’s loved and known her longer than his months-long marriage to Keshia actually lasted. It’s rumored that the two were together prior to him dating and marrying Keshia, but later reconciled once he and Keshia split. So, in actuality, maybe there is real love there and they won’t end up making any hasty decisions to separate.

Besides, after Ed and Keshia suddenly became engaged, then got married the very next day in 2015, I think they both have probably learned a valuable lesson in moving too fast in a relationship: Don’t.

Meanwhile Back At The Ranch: Keshia Shows Baby & Raps About Ed

Meanwhile back at the ranch, Keshia Knight Pulliam is partaking in several firsts in her life. For starters, for the first time ever, she’s finally shown her baby, Ella Grace’s, face. Although she showed a throwback newborn pic of her toddler, fans were simply happy she at least showed them something. Check out her post below…

Another first for Keshia, is that she’s rapping on a song with her brother. Guess what she rapped about though? Ed Hartwell! Her brother shared a snippet of the song on Instagram and in Keyshia’s verse she said: “My baby daddy hit the switch up, I knew I should’ve got a prenup.”

For those babies’ sakes, hopefully Ed and Keshia will find a peaceful way to allow the soon to be siblings to form a beautiful bond…even if the babies’ parents can’t stand each other.