Singer/musician, Raphael Saadiq, has always been a private dude, so for decades, not much has been known about his past. There’s one fact he revealed in recent years, that most fans of the former Tony! Toni! Toné! lead singer never knew. He was once worked for the late, great Prince and when you see what Prince made him do, you will probably flip out…or at least lightly chuckle.

Raphael Saadiq On Working With Prince Back In The Day

In an interview with The Quietus, Raphael Saadiq revealed that at the age of 18 he auditioned to be Prince’s protege’ and also part of the band Prince created for Sheila E., during their “Parade Tour.” He was shocked when he made it, but didn’t let Prince know:

“I was taught by my dad not to look excited at the point Prince said my name. I played the bass guitar in my audition like Prince meant absolutely nothing to me,” [said Saadiq]. It worked, even if Prince’s non-standard take on masculinity would later come as a surprise.

What Prince Made Raphael Saadiq Do

The hilarious part is that Saadiq says in order to be in the band, he really had to become one of “The Blouses” that the late Charlie Murphy once spoke about in his infamous “Chappelle Show” skit. Check out what Saadiq said below… 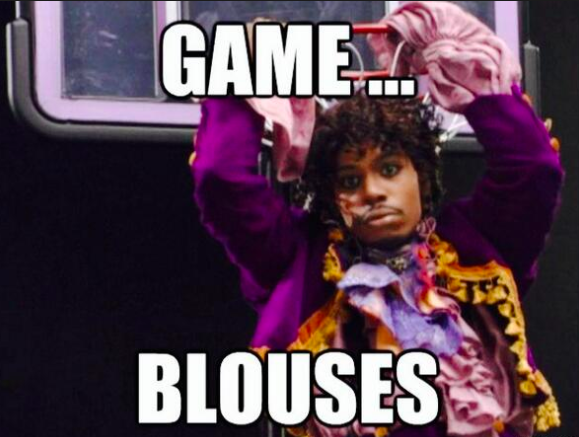 “To be in the band you had to wear a ton of make-up, it was mandatory. You had to almost sign a contract to wear eyeliner, blusher and basically look like a girl. That Dave Chappelle skit was no joke, we literally were The Blouses!” After the shows with Prince, Saadiq would transform his appearance getting dressed back into a bomber jacket, Detroit Titans baseball cap and white T-shirt while rocking some 501s and Nike Quartet sneakers. “Prince liked that I dressed differently cos’ he could see I was my own person. I knew when I was playing ‘Erotic City’ in Yokohama, Japan, that my life had sort of changed.”

HILARIOUS! So that Charlie Murphy skit was exactly on point! Gotta love Prince..I tell, ya.’ Saadiq had more to say though…

Saadiq Not Fond Of Grammys, Nor Losing To Jennifer Hudson

Saadiq was also discussed the #GrammysSoWhite backlash the Grammy Awards received in recent years and why he chose to skip them. Not only did the talented musician and singer seemingly feel disrespected by losing to the less talented (comparison), Jennifer Hudson, in 2016, but he also agrees that the Grammy’s are out of touch with Black music.

“They’ve [The Grammy Awards] 100% lost their way and are out of touch. I remember The Way I See It lost to J-Hud at the Grammys! I wasn’t even surprised. If you have a day job and work in a corporate building then that’s who that show is for. Britney Spears won a Grammy before Steely Dan, that’s crazy!” Rather than ‘fix the Grammys’ as the likes of Kanye West have suggested, Saadiq says we should just let them die: “There’s no point sitting down and talking about it. All awards shows needs to get off TV and just die. Music would be much better if people didn’t make it for an award.”

Also when randomly asked about Donald Trump, Saadiq kept it real: “He is a comedian and a waste of time.”