Regina King Keeps Her Oscar Where You Would Least Expect It, In A Very Relatable Place 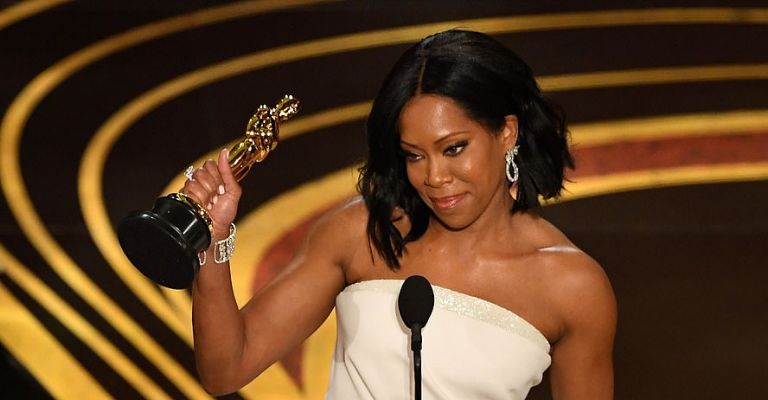 Fans have been riding with Oscar-winning actress, producer and director Regina King since she played lovable around the way girl Brenda Jenkins on the classic black television show 227. And throughout the years we’ve watched her grow from a spunky child star to a well respected actress who has proven to be one of the best talents in Hollywood. But even though she can finally add Academy Award winner to her list of accomplishments she hasn’t let any of the notoriety go to her head.

Since her days as girl next door Brenda on 227 Regina’s popularity has skyrocketed with roles in films such as Poetic Justice, Jerry Maguire, and Friday. As her career continued her roles began to diversify, especially when she provided the voices of both Huey and Riley Freeman on the hit animated show The Boondocks as well as Laz Alonso’s long suffering wife in the holiday classic comedy This Christmas.

In recent years Regina has continued her ride with turns as powerful black women in the acclaimed Netflix series Seven Seconds and, of course, the movie she snagged the Oscar for If Beale Street Could Talk. Her dynamic range keeps audiences captivated, but underneath it all Regina is still the same approachable sistah she’s always been. In a recent interview with media mogul Shonda Rhimes’ on her Shondaland website (via Essence) Regina was very open and honest about how, though she appreciates winning, sometimes she forgets that it even happened.

“I am reminded every time when someone reminds me,” King, who is too consumed with keeping her career on track to focus on congratulating herself, told Shondaland recently.

“For me, it’s all systems go, and always has been. There was never a time during awards season when the momentum had stopped,” she affirmed.

“And that’s important, when you dial it down to the nuts and bolts of it all, you hope that the hardware creates more opportunities for everyone,” she added.

And Regina has been very vocal about creating more opportunities for women in Hollywood so there’s no doubt that whatever she puts her mind to she will accomplish, as evidenced by her Oscar win. But wait, where exactly does she keep it?

Next Page: Regina Keeps It Real About Her Oscar Display >>>