A while back, we shared the “A-ha” moment most of us had when we realized just HOW seasoned of an actor, Larry B. Scott REALLY is. Remember his character, “Lamar Latrell?” His “Revenge of the Nerds” character as the dainty ‘Tri-Lamb’ frat’ brotha, who rocked the daisy duke shorts, cracked us up back in the day. In the 1984 cult classic film, “Lamar” held it down for his fraternity, when he rapped “Clap your hands everybody, and everybody clap your hands. We’re Lambda Lambda Lambda and Omega Mu…” Well, here’s a news flash for y’all: He is NOT gay! Wait ’til you see Larry now and what he revealed about the backlash and joys of playing his gay “Nerds” character…

Today, at 52 years old, Larry B. Scott is enjoying life to the fullest. He’s known for having an outgoing personality that pretty much lights up the room, no matter where he is. These days, he’s an acting coach for many new actors. He runs the acting studio, W.I.T. (Whatever It Takes) Filmwerks and he’s recently joined “Empire” actress, Tasha Smith’s, TSAW (Tasha Smith’s Acting Workshop), which greatly helps to train actors as well. In addition to grooming new actors, Larry is also still gettin’ his acting on, currently with the TV series, “Black Jesus.” 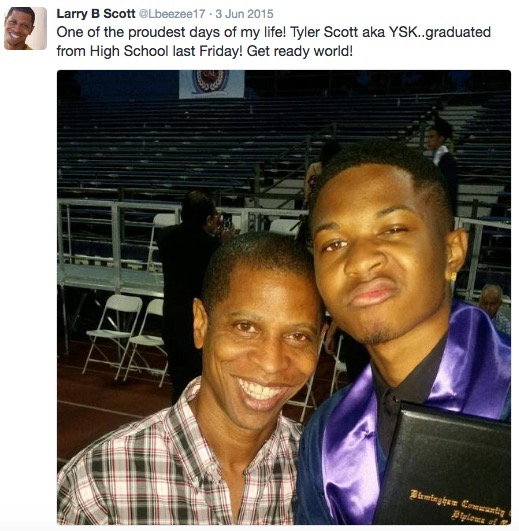 His careers aren’t the only things he’s proud of. As we previously reported, Larry is married to his wife, Valerie Scott and is the proud father of two sons, Tyler Scott and Brandon, whom he’s very close to.

On The Backlash He Received For Playing Gay “Nerds” Character

The “Revenge of the Nerds” legend is a heterosexual brotha, who played his character so well, that many people back in the day, believed he WAS his character. In an interview with Telegram News, he admitted that he got shunned by a lot of people- in particular, Black men- at that time:

Larry B. Scott: “Back then I got shunned out by a lot of the brothers. Now it’s fine, everyone loves me. My name became,”That’s him!” They were thinking, “We finally got a brother on screen and he has to be gay!” But I was always an actor, I just wanted more challenging roles. The more roles I got the more people got to see me outside of role as Lamar Latrell. But you’ve got to be ready for the heat if your the first one!”

When asked if he was nervous about taking on such a taboo role:

“No because it’s your job as an actor to take on a challenge. I’m from the hood, the projects. I wasn’t brought up that way so I knew that wasn’t me. I did my part I can’t force the audience to like and accept it. A long time since then I’ve had the right to pick and choose my roles.”

As we previously reported, in a prior interview with Heeb Magazine, Lamar was asked how he found time to relax, given his hectic schedule, to which he replied:

“Thank God for Vitamin P, or I’d be crazy. Pu$$y is the equalizer.”

On The Misconceptions Gay Men Had About Him

In that same Heeb interview, Larry acknowledged that while he has nothin’ but love for the LGBTQ community, he oftentimes disappointed gay men, who mistook his acting for real life:

L.B.S.: “On the streets I get noticed from Nerds 10, 20 times a day. But it’s [as] ‘that dude’ or ‘the gay guy,’ which is exactly what you want to hear when you’re on a date with a girl. But Nerds opened up a lot of doors for me, no pun intended. Folks didn’t realize I could act.”