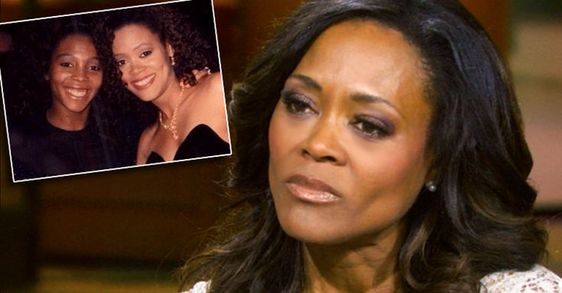 To fans, Robin Givens is a successful, talented actress who has been in the game for many, many years. but, when the cameras are off, Robin has a different focus – family. For those who don’t know, Robin comes from a close-knit family and she shared an amazing relationship with her younger sister, Stephanie Givens.

According to the Daily Mail, Robin revealed her sister has always been her best friend. However, their lives took an unexpected turn for Christmas of 2014.

“I remember the last Christmas we spent together. She came out to Los Angeles and we went to the Ritz-Carlton. It was beautiful here and we had champagne outside and then went to a Korean spa. It was so much fun.”

Stephanie became ill and was told she had “some kind of virus,” but just one week later she received devastating news because she was suffering from much more than a virus.

She was diagnosed with breast cancer on a Friday afternoon. By Sunday, the aggressive cancer had taken over, and Stephanie died due to complications of the deadly disease. Needless to say, Robin and her family were devastated:

“She went back the following week and was put into the hospital on Thursday, diagnosed on Friday and died on Sunday,” Givens recalled. “It all happened so quickly that it’s hard for me to even know what happened.”

“Friday afternoon, she was diagnosed with [breast] cancer, and she was then gone on Sunday,” Robin revealed on the CBS’ The Doctors. Robin also shared her reaction to her sister’s untimely death during an interview with People magazine. “My sister was my very best friend in the world,” Robin, 51, told PEOPLE. “Her passing was a shock. I had someone describe it to me like losing somebody in a car accident. I was so devastated.”

Robin also spoke about her sister in a previous airing of Hollywood Today, with Theresa Caputo. The famed psychic brought the actress to tears with a heartfelt message about the grieving process. Caputo also told Robin that fallen loved ones became angels who watch over those who are still living. Robin admitted she’s actually felt her sister’s presence and Caputo claims it was her sister’s way of letting her know she’s okay.

What Her Sister’s Passing Taught Her

In addition to her sister’s untimely death, the horrific loss was also disturbing because Stephanie took health and fitness very seriously. She worked out regularly and made it a point to eat right. The aggressive cancer just proves that anyone could be faced with such medical complications.

So, Robin has been making personal efforts to prevent the possibility of misdiagnosis of breast cancer. She makes sure she has regular mammograms.

Although life will never be the same, Robin says she’s managed to cope with the devastating loss by being strong for her mother and sons. “It was the first I understood when people say you have to be strong for someone else.”

Our deepest condolences go out to Robin and her family. May her sister, Stephanie continue to rest peacefully..