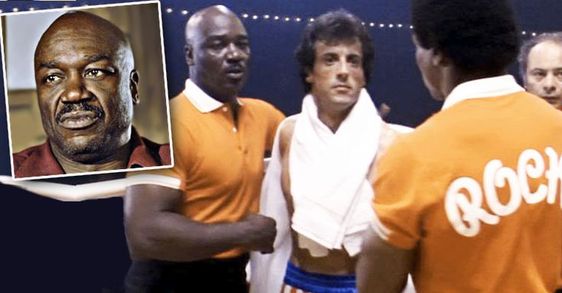 Remember the trainer/manager who first trained “Apollo Creed” and then “Rocky Balboa” in the film, Rocky? We all knew him as “Tony ‘Duke’ Evers,” the no-nonsense character, but what we didn’t know is that the real man behind the character, the late Tony Burton, had something in common with “Duke.”

In real life, he was a boxer, before the world ever knew him. He even won the Michigan Golden Gloves Light Heavyweight Boxing Championship and boxed professionally for a short time.

But before Burton got his start in acting, he was living the wild life on the streets and going for broke every chance he got. One day his luck ran out and he got hit with three and a half years in prison for robbery. He served his time at the California Institution for Men in Chino, CA.

Realizing robbing folks was bad decision, he began attempting to turn his life around while in prison and you better believe that he definitely flipped the script on his destiny! While in the pen,’ Burton got focused and eventually earned his college degree behind bars. He also found his other true passion- acting.

In past interviews, he revealed that his agent never wanted him to make his prison time known to the public, but he wasn’t trying to hear that because of this reason:

“I prayed and it was revealed to me that I should let it be known. How can I show what Christ did for me, unless I tell my story of what it was?”

“Prison for me, was productive because I applied myself while I was there. I got my high school diploma and degree from the University of California. But most important, I got myself together and found out who I was and how I could proceed without destroying myself.”

Via Calhoun Times: In prison, Burton said he lost his urge to steal. He was also introduced to the joys of acting in a group that used psychodrama as a form of therapy. in one exercise Burton did with another prisoner, burton said his acting partner had an emotional breakthrough that made Burton realized the power of theater and propelled him on his current career.

After prison Burton started acting in small theater groups in L.A. and he eventually acquired an agent- the same agent as Carl Weathers a.k.a. ‘Apollo Creed.” realizing Burton’s acting abilities, Carl actually helped to land Burton the role of “Duke” in Rocky.

After all that he’s been through Burton said this of his success: “I never expected it and I’m grateful because I realize it didn’t have to happen to me. I’m just grateful I’m the one the Holy Sprit chose.”

It’s no secret that many Black men, whether falsely accused or not, have unfortunately had some type of brush with the law, or served serious prison time like Burton, but he is another excellent example of what it means to not allow your current circumstances/realities dictate your destiny. We have the power to create the destiny that we want to live, we just have to fight beyond our personal comfort zones to end any unhealthy cycles and pathologies we’ve learned along the way, and acquire or build on the healthy ones.

Tony Burton sadly passed away on February 25, 2016 at age 78, after complications from pneumonia. Respect to Burton for having openly shared his story and his wisdom with the world.