Depending on which era you come from you either know the legendary actress, Leslie Uggams as “Kizzy Kinte,” the daughter of “Kunta Kinte” from “Roots” back in the day, or you know her as the “Empire” character, “Leah Walker,” “Lucious Lyon’s” bipolar Mother, who tried to kill him as a child. However, because I’m Old School, you’ll probably catch me referring to Leslie Uggams by both her real name and her”Roots” name, “Kizzy,” simply because I can’t help it…she PLAYED that “Kizzy” role and left a lasting impression on me for life. Okay I just digressed, moving on…

LESLIE REVEALS THE PLIGHT OF HER INTERRACIAL MARRIAGE AND THEIR KIDS

We want to share a few surprising fun facts about “Kizzy.” in particular her White husband, whom many were shocked that she married at the time, given that her character “Kizzy” was so adamant about being with a strong Black man in “Roots.” But some failed to realize that was just a movie and to Leslie Uggams, love has no color barrier. 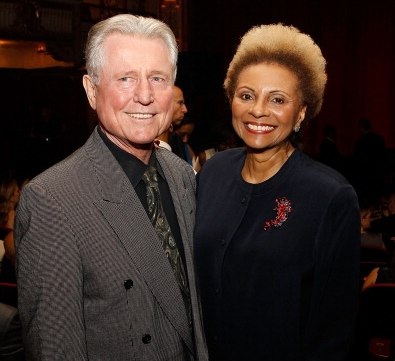 Meet Grahame Pratt, he’s Australian and has been married to Leslie Uggams for 56 YEARS (since 1965)! That’s beautiful isn’t it? “Kizzy” talked in detail about the many obstacles they faced as an interracial couple during the days when for interracial marriages in the 60’s were still illegal in some parts of the country, and racial tensions were at an all time high.

Read snippets from her 1967 Ebony Magazine interview below…oh, and she used the word “negro” instead of African American or Black, because remember, that was the common term back then, so don’t trip, Mrs. Leslie no longer uses the term “negro” today.

HER FAMILY’S EVENTUAL EMBRACING OF WHITE HUSBAND
Leslie’s family eventually came around too and here’s what Leslie explained about that. “Kizzy’s” ’67 interview continued below:

Well they obviously have done something right in their marriage, because 56 years is NO joke! Props to them for holding it together for so long.

Their daughter, Danielle Chambers is 50 years old and married.

Their son, Justice Pratt, is 45 years old and as far as we know, he isn’t married…