Most of us, Old Schoolers, know actress, Kim Fields, as “Tootie” from “Facts of Life” and as “Regine” from “Living Single.” We also know her lil’ sis,’ Alexis Fields…remember her? Alexis- or as we also refer to her as, actress Chip Fields,’ youngest baby- is better known as the teen actress from several 90’s sitcoms, including “Sister, Sister,” “Moesha,” “Kenan and Kel,” and “Roc.” Well people, those were her youngin’ years and she was a cute little lady back then, but now she’s is ALL woman and heating up the internet somethin’ SERIOUS!

The Photos That Have Fans Talking

Fans have just caught wind of Alexis’ latest sexy photos that she’s been posting of her bangin’ post two-babies body, which she obviously achieved through hard work and dedication in the gym. Back in the day she was always more on the slender side, but now things done changed. Alexis Field’s is now 36 years old, married with two kids, but that does not stop her from flaunting her sexy mommy swag for the ‘Gram. **Scroll down to see Alexis now and her hubby & kids**

Okay so let’s talk. For real. 1st, yes my room has clothes everywhere. Now on to the point… After I had my son, my ab muscles separated (diastasis recti) and I had a really bad hernia. I was told I couldn’t work out because it would only make it worse. With no way to “get my body back” it was hard emotionally. My husband and I talked and I decided to have surgery to correct it. I was scared, especially since I had just had an emergency c-section a little over a year before (my son was too comfy in my stomach and cuddled up under my ribcage. Fun. Not really). Anyway, going under the knife is no joke. But my doctor was AMAZING and all went well. Almost a year later, I was taking some medication and gained weight. A lot of weight. I couldn’t fit any of my clothes. A lot of tears flowed. But I was blessed with two healthy children. How could I complain, right? I was still sad. It was mixed with a little Postpartum if I’m being completely honest. Okay, a lot of Postpartum. I told you I was gonna keep it 💯. Anyway, here we are a year later and I’m working my way back to my comfortable weight. I’m working out at home, drinking lots of water and trying to eat better. TRYING. I’m sharing this picture I took tonight because 1. I like it. 2. I know the struggle after you have children. You may not be able to afford surgery, but don’t give up on yourself. We have a right to be whatever feels sexy to us. Whatever feels HAPPY to us. So don’t look at pics on IG and be discouraged. Get excited and get that ass to work. I know I am! I’m not gonna let these young girls show me up. I’m that 90’s kind of fly!! 😝 #KaycieAndKadensMommy #KevinsWife #GrownAssWoman A huge thank you to @drghavami #HesTheBEST

Needless to say, her many male (and female) fans, who grew up watching her on TV, are now very pleased with Alexis’ workout results…in the most respectful way of course. Aiight, forget the politically correct jibberish and lets just call it what it is- Alexis is sexy as hell and and not afraid to flaunt her bangin’ body and I’m not mad at that one bit.  Check out more of her recent photos that have folks talkin’…

Never let them tell you you can’t.

She’s Proud Of Her Mommy Scars

As you can see, Alexis Fields has grown up…to say the least. Speaking of her grown woman swag, she’s also not apologizing -nor should she- for the beautiful mommy scars she’s earned, as a result of birthing her babies: 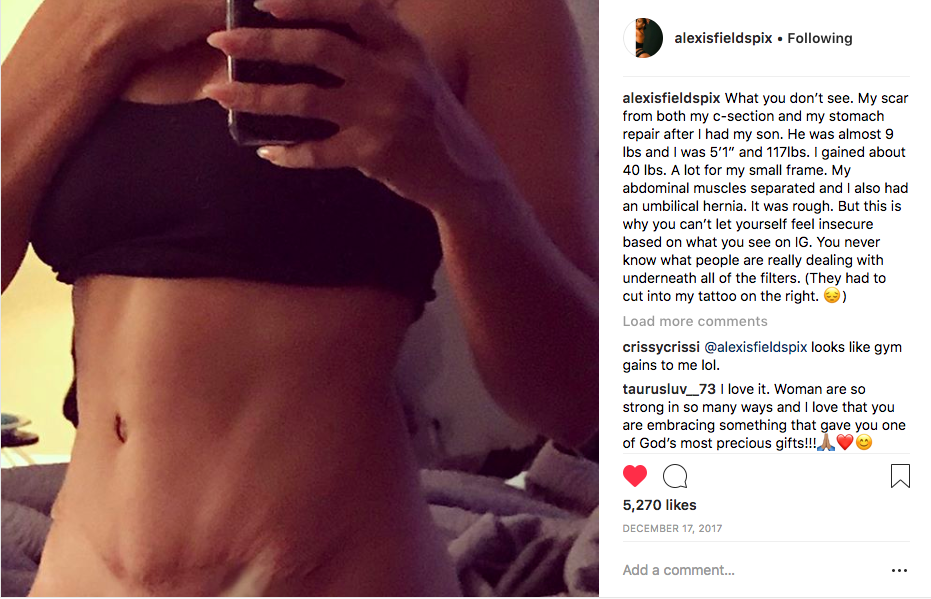 Alexis and her husband, Kevin Jackson, have been married for 11 years and have two cool little mini-me’s. See pics of the family below…

They Get It From Their Momma

And just in case anyone forgot where Kim and Alexis Fields get their looks from, their legendary actress mother, Chip Fields (below pic; right), still got it at 66 years young…

For any of our young Old Schoolers who are reading this, Chip Fields was in the acting game long before her babies. She’s best known as “Penny’s” (Janet Jackson) crazy, deranged momma in “Good Times” and also as the hilarious bourgie mother to her daughter, Kim’s, bourgie character, “Regine” in “Living Single.” All of three women are very talented. Looking forward to seeing what the future holds for them.