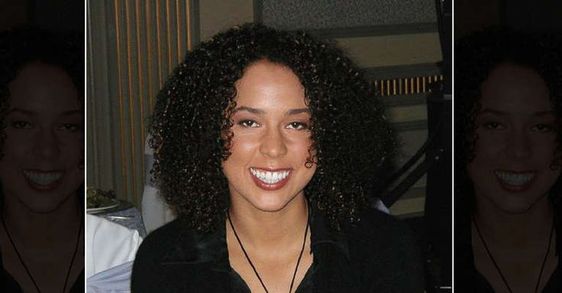 Her name is Alexandra Stevenson, and she has become a major player in the world of tennis. I’m talking Serena and Venus Williams’ level of tennis, Alexandra retired from the sport in 2018…but she was no small-time tennis player by far.

Some of you may have heard by now…now that she was involved in a major scandal that erupted in 1999 when she played in Wimbledon. The scandal was surrounding the mystery of her father and tabloid reporters were beginning to swarm around her to find out if what they’d been hearing through the grapevine was actually true: That her father is an Old School Sports Hall of Famer that we ALL know. She and her mother were privately getting financially taken care of very well by her Dad, but her Mom had to sign an agreement when Alexandra was a baby, that guaranteed she would never come forward with that information because it would damage her Dad’s rep.

So Alexandra had to keep quiet, but that doesn’t mean that her father’s public denial of her and his absence in her life didn’t sting just as badly. In fact, she was angry by all of it.

Dr. J Is Her Daddy

Her pops is Dr. J a.k.a. Julius Erving, one of the greatest basketball players to have EVER done it! Alexandra’s mother is freelance sports journalist, Samantha Stevenson, whom Dr. J began having an affair with behind his wife, Turquoise Erving’s, back after he’d met Samantha while she was covering his team for Sport magazine in 1978. Erving was married to Turquoise from 1972 until 2003.

Dr. J wrote a memoir a few years ago, to come clean about all the wrongs that he’d done to his daughter. He and Alexandra now have a beautiful relationship, but that didn’t just happen overnight. Here is how the situation surrounding Alexandra came to be:

Erving describes Samantha Stevenson as ‘a smart single woman – a pretty white girl, a bit of a hippie giving off a vibe of availability’.

‘She becomes someone who helps me unwind if I’m feeling high-strung or stressed. I can drive over and spend a relaxing evening that might even include oral sex,’ Erving writes. I can only remember one time that we actually had intercourse, and that was because she had just gotten this new orthodontia to straighten her teeth. With wire and gleaming metal bristling in her mouth, oral sex was not an option.’

Daughter Met Him At 8, But It Was A Painful Meeting

Something sad and remarkable happened when Alexandra was 8 years old. Julius Erving was holding a one day only basketball clinic at a local gym in her neighborhood. She finally asked her Mom, Samantha, if she could go and just lay her eyes on the father she’d only seen on TV and in magazines. Her Mom was hesitant, but eventually agreed. Alexandra was an excellent basketball player at that time, so she thought she would just blend in with the other kids who were there playing b-ball in front of Dr. J also. Here’s what happened next though:

Alexandra showed up with one of Samantha’s close girlfriends, who wrote ‘ALEXANDRA STEVENSON’ in large block letters on a name tag … then stepped back to watch the fireworks.At first, Julius didn’t recognize Alexandra. He’d seen photos of her — Samantha would send some to the 76er offices once or twice a year — but he didn’t make the connection. What he did notice was a lanky, determined little girl, diving all over the court in her Size 9 sneakers, and he chose her as one of the camp’s top performers. Her prize was a personal autograph from him, and when he looked down and saw ALEXANDRA STEVENSON, Erving’s exact baritone words — according to Samantha’s friend, Geneva Kandel — were, “Nice to meet you, Alexandra.”

The little girl froze. She glared at Julius, said, “I don’t want your autograph,” and stomped away.
“I realized it was Alexandra, and it was quite embarrassing,” Erving says. “I’ve replayed it a hundred times in my mind and thought about how it could’ve turned out differently, maybe if it had been set up a little better. It might be a wound that never heals for her. I was at the end of my career; a lot was going on. I was somewhat oblivious during that time.”

Kandel actually remembers what she saw in Erving’s eyes that day: tears. She remembers Turquoise, who was at the gym, fainting. And she remembers going back to retrieve the autographed basketball.

Alexandra brought the ball home that night and wouldn’t let her mother see it or touch it. Instead, the little girl locked the bedroom door and examined her father’s autograph for hours. She then placed the ball on the farthest reaches of her closet shelf, hid it behind her dolls and firmly shut the closet door, never to look at it again.

After his book released, Dr. J caught a small amount of flack for telling his life story and he stated that he never had intentions on hurting anyone with his book, but he said this was the reason for giving such a raw perspective about his life in his:

Dr. J- “How could I write an autobiography and leave out things that are fact-based, things that really happened? If you’re going to write an autobiography, your life’s gotta be an open book, then I think you gotta be candid. I think I’d have less respect coming my way if I didn’t write the facts. If it was completely ignored, like it never happened then that would be a bigger problem than dealing with potential hurt feelings or someone disagreeing with what my recollection was.”

That is an excellent point that Dr. J stated and we commend him for being so brutally honest about what he did to his daughter, Alexandra, and also to his then-wife Turquoise, and Alexandra’s mother, Samantha. The fact of the matter is that he was a deadbeat dad for most of Alexandra’s life…that’s just what it is, but he is a true example of what remorse, forgiveness and redemption look like.