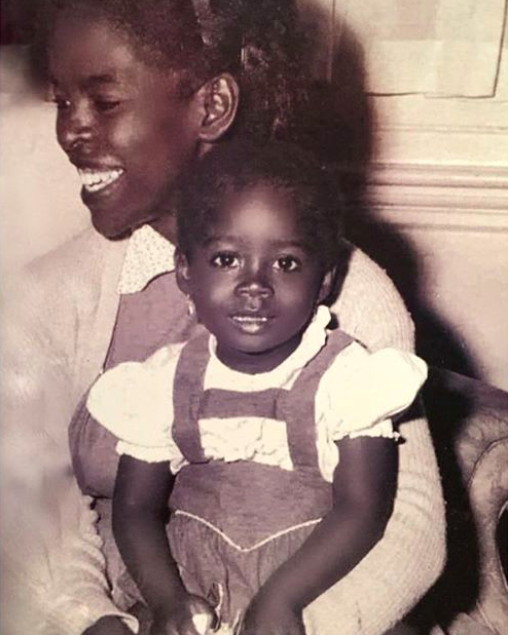 The adorable little girl in the above photo has touched the hearts of millions, with her performance in one of the most iconic Black films of all time. She’s also African royalty…literally! Many may either not know her name, or know how to properly pronounce her name…but that’s okay, because her face is all we need to see in order to know exactly who she is and what she’s accomplished. If you think you’ve figured out who this precious baby grew up to be, get your scroll on and find out if you’re correct on this one…

Who’s That Girl…Or Shall We Say, Princess? 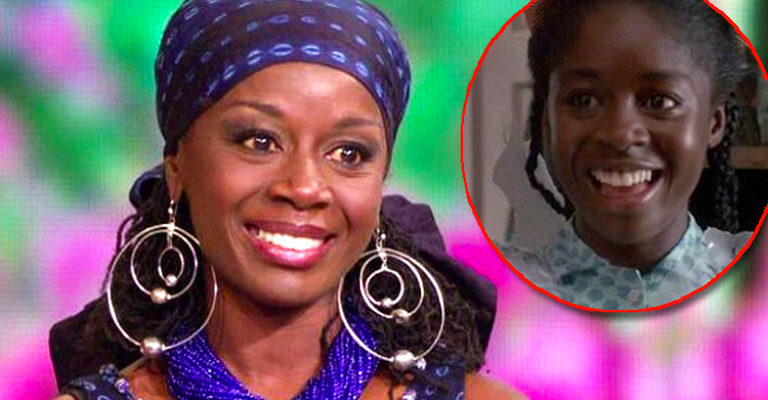 If you guessed that the young girl chillin’ on her mama’s lap is “Nettie” from “The Color Purple,” you’re right! If you didn’t choose her, then…well, you gotta step your game up fam,’ LOL.

“Nettie’s” real name is Akosua Busia and she is not only a real life princess, she also has a beautiful daughter with her famous ex-husband. Read on for the scoop on that.

Akosua was born in Accra, Ghana, into the Yenfri Royal family in Wenchi in the Brong-Ahafo Region of Ghana. Her father, Dr. Kofi Abrefa Busia, was a  royal prince, who later became the Prime Minister (the President) of Ghana, making Akosua and her sister the ‘first kids’ to the First Family of Ghana from 1969 to 1972. Prime Minister Kofi Abrefa Busia was married to the Busia sisters’ mother, Naa Morkor Busia, up until the time of his passing. The former President Busia died from a heart attack in 1978 and his wife, Naa, passed away in 2010 from unknown causes.

Prior to becoming the President of Ghana, Dr. Busia earned many degrees and studied at several prestigious universities. He also made history, by becoming the first African student to attend England’s infamous Oxford University in the early 1940’s.

Mr. and Mrs. Busia’s life’s work and dedication toward making Ghana a better place for their people, left a lasting impact on their children that will never be forgotten. In fact, to honor her mother on Mother’s Day 2017, Akosua posted a rare television clip of them putting in work as the first fam’ of Ghana back then. Check out the clip below…

A love like that!❤️ I miss you mama ~ I praise God you are in a better place… #eternity #mothersday #mama #love #ghana #firstlady #grace #beauty #Godliness

By the way, not only was Akosua’s mother beautiful, she represented class, style, and elegance, with such poise.

My father, His Excellency, Dr. Kofi, Abrefa, Busia, giving his inauguration speech as Head of State at Black Star Square in 1969 ~ Flashback 4 Instagram posts and see our new President, Nana, Akuffo-Addo, quote these exact words in his own Inauguration speech at Black Star Square in 2017! This footage is from the the documentary I directed: THE PROF. A MAN REMEMBERED. The girl in white is my daughter, Hadar. @hadsy @nakufoaddo #fbf #GHANA #inauguration #documentary #npp #politics #freedom

“Nettie” and John Singleton -who first blasted onto the Hollywood scene with his 1991 classic, Boyz ‘N The Hood”- dated for quite a while and ultimately married on October 12, 1996. The then 30-year old Ghanian, West African born, Akosua, and then 28-year old California native, John, seemed like the perfect couple. But unfortunately, just a year after marriage, they divorced.

Their beautiful blessing that happened during their union, was that their 21 year old daughter, Hadar Busia-Singleton, was born (April 3, 1997).

The two former lovebirds happily reunited to (in the Instagram video below) watch their daughter make history for her 2016 college graduation. In her video caption, Akosua explained exactly how Hadar set a new precedent that they are beyond proud of:

HISTORY! This time last year a Ghana flag was errected at Interlochen Arts Academy, as my daughter, Hadar, became their 1st ever Ghanaian graduate! I was performing in Eclipsed on Broadway, the curtain came down at 10.30 pm, leaving me 11 hours to make a 12 hour drive and get there on time. Thanks to @jeremy.bullock I made it! Daddy John, Aunty Abe, Uncle Chip, Sam, and others, all converged for the great occasion ~ Blessings to all this years High-School and College graduates! @hadsy @jeremy.bullock @abenapabusia #fbf #graduation #ghana #arts #school #college #future

And there ya’ have ILOSM fam’…a few Old School fun facts about the little African princess who grew up and forever touched our hearts in America and beyond.