Our sincerest condolences go out to TLC singer, T-Boz, and her family today. She’s just released a very angry and heart wrenching statement online, that her beloved cousin was shot and killed by police in Peoria, IL. What’s equally heartbreaking is that she says he did nothing wrong, was mentally challenged, unarmed and she says the cops knew he was mentally ill prior to shooting him. Now she and her family want answers and justice. 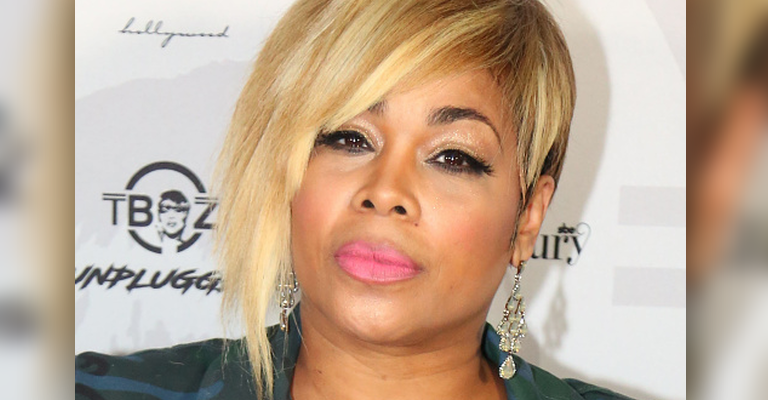 The incident happened on September 22, 2017, and T-Boz has been going OFF on Twitter ever since, giving details and updates on the lies she says police are telling as a coverup for shooting an unarmed mentally challenged man. She says that her cousin, Eddie Jr., was shot for no reason after cops thought that he was a robbery suspect from a nearby bank. Turns out he was NOT.  See the rest of the heartbreaking details T-Boz has given below.

T-Boz’s Announcement About Her Cousin’s Murder

@TheRealTBOZ: My ❤️Is Broken! U Think The Tragedies That Happen Across The World Wouldn’t Happen2 U At Least U Hope They Won’t! But To Us It Did … The cops shot my cousin 17-20 times KNOWING he was mentally ill Their Stories R diff EVERYTIME Making him out 2 be something he’s NOT … Pray for My Family and please ask for TRUE FACTS AND JUSTICE!!! … This Country is Tainted PERIOD 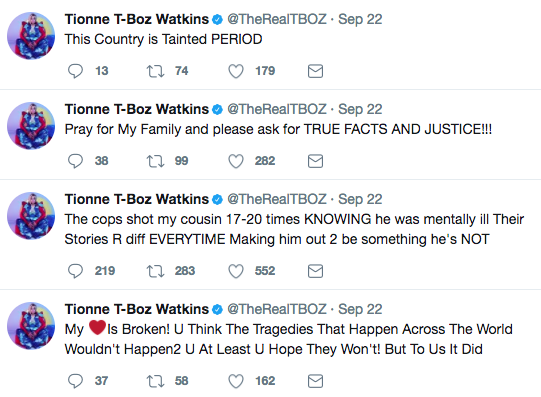 The Fake News & Cops’ Cover Up

The news is reporting “fake news” about what happened, according to T-Boz:

It's crazy to me how the press lies and reports FALSE NEWS! I know about it on the celebrity side but the LAW and news reporters

@TheRealTBOZ: It’s crazy to me how the press lies and reports FALSE NEWS! I know about it on the celebrity side but the LAW and news reporters. Are supposed to be or source of correct and factual information when I post this interview they say 3 different things in ONE interview. They say my cousin had a gun! Whatever he is holding isn’t a gun! And they used his Mother to bring him out telling her…since he was mentally ill he’ll get the help he needs! He came out because he heard his mother and they murdered him. No matter what they SAY he did they shot him 18 times he NEVER had a violent record or harmed ANYONE! Not even the day he was shot. He didn’t hurt ANYONE NEVER HAS! They didn’t even wait for the negotiator to come and talk to him! No body cams? Kept his parents and everyone blocked off for a 4 block radius so NO ONE COULD SEE! Why was his body left on the ground for 8-10hrs” 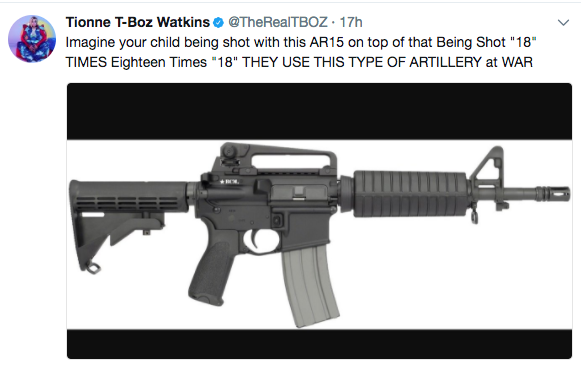 T-Boz then shared the various lies cops are now telling. But she also shared a screenshot of the news coverage that showed her cousin walking into the bank. The security camera showed him next to the door and it was reported that he ‘appeared’ to have a gun. However, as he walked passed the door, the ‘gun’ he so-called had, was actually the DOOR HANDLE.. Incredible! See what T-Boz tweeted about that below:

@TheRealTBOZ: First they said he ran out shooting LIES then they changed it to walking aggressively towards police-BUT YALL TOLD HIM TO COME OUT…Now the question is did he have a gun? You tell me because I’ve never seen a gun like that before…” 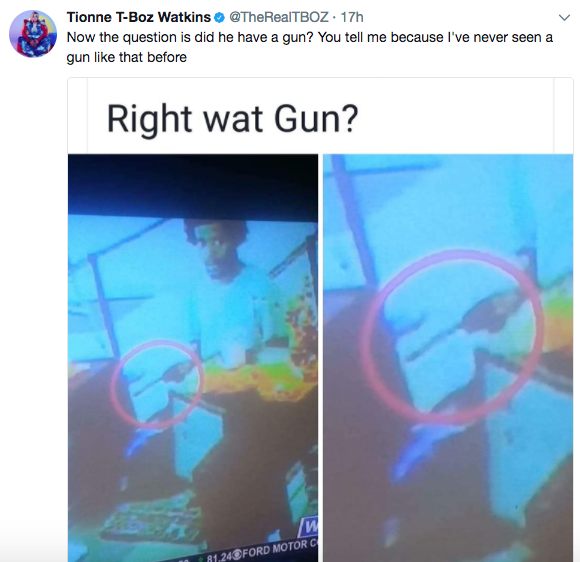 T-Boz has now taken to Instagram as of Monday and she gave a lengthy message, laying out the details of what transpired between cops and her her cousin.

T-Boz Asks For Your Help

T-Boz is asking everyone who reads this, to please spread the word about her cousin’s murder so they can get justice:

“His mother needs JUSTICE! She needs Help to get the word out!”

This is so sad and we hope T-Boz and her family get every ounce of the justice they deserve. May her cousin, Eddie Jr., rest peacefully.