We’re sending our condolences to Ray Charles’ family at this time. It’s just been confirmed that the Army soldier who passed away overseas was the grandson of Ray and his wife of 22 years, Della Beatrice Howard Robinson (who was portrayed by actress, Kerry Washington in the biopic, “Ray”). He was 36 year old Sgt. Conrad Robinson and the Pentagon announced that he died at Camp Bondsteel in Kosovo on May 24, 2018. Conrad was the son of Ray’s and Della’s deceased son, David Robinson, and his wife, Synthia Robinson.

Details surrounding his passing are extremely suspect and at this time, the only thing the Pentagon has stated is that he died from a ‘non-combat related incident.’ According to NBC San Diego News, Sgt. Robinson’s mother, Synthia, said he was found in a chair unresponsive on Thursday (May 24) morning before his regular workout. Conrad’s death was still under investigation at the time of the announcement.

Via NBC7 San Diego: “We’re extremely saddened by the death Staff Sgt. Conrad Robinson,” Lt. Col. Kevin Kelly said. “Staff Sgt. Robinson was known around the battalion for his infectious smile, humor and kind heart. He was the definition of selfless service and took the time every day to listen and mentor Soldiers. Our thoughts and prayers are with his family and friends during this difficult time.”

Sgt. Robinson died while serving his very last mission as an 18 year veteran. He was deployed on peace mission as a preventive medicine specialist for Operation Joint Guardian, in conjunction with NATO, which was helping to secure the Serbian province.

It was widely unknown that Sgt. Robinson was Ray’s and Della’s grandchild, until Ray’s daughter, Raenee Robinson, announced the funeral services for her nephew on Tuesday, June, 5, 2018: 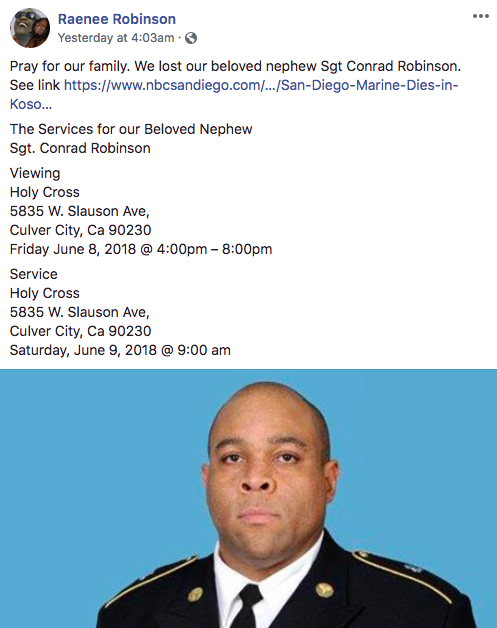 His Mother Speaks Out

Sgt. Conrad’s mother spoke to the local news and expressed her heartbreak:

“I still can’t believe it,” she told NBC 7. “I just can’t believe that he is gone. … He’s the type of son that you know calls mom checks up on mom,” Synthia said. “Every single Mother’s Day Conrad would send me flowers.” […] This year, however, Robinson gave a charm ring that Synthia turned into a necklace. She didn’t know that it would be the last Mother’s Day present he would give her. “This charm necklace is going to be close to my heart for him because he’s not going to be here,” she said through tears. […] “He was the best son, husband, father, caring person — would do anything for anybody.”

Conrad was a devoted family man and he dreaded having to leave his wife, Yolanda, and their 5 and 10 year old daughters for so long this year (2018), but he was grateful they understood his job. Here’s what he posted in January:

“Well it’s a new year but I already know how this year is going to be (😡💩). Tomorrow I have to go down to San Antonio for a month, than come back and 2 weeks later hop on a bird and take off for 9 months. So I’ll only be with my family for 2 months but I know that they understand and we will make it through this together.”

The family of four resided in Los Angeles, CA, but Sgt. Conrad Robinson was from San Marcos, TX, where his family still lives. We sincerely hope their 2 beautiful daughters one day find comfort in knowing that their father loved them more than life itself.

Conrad Robinson was preceded in death by his father, David Robinson, who passed away at age 54 in 2013.