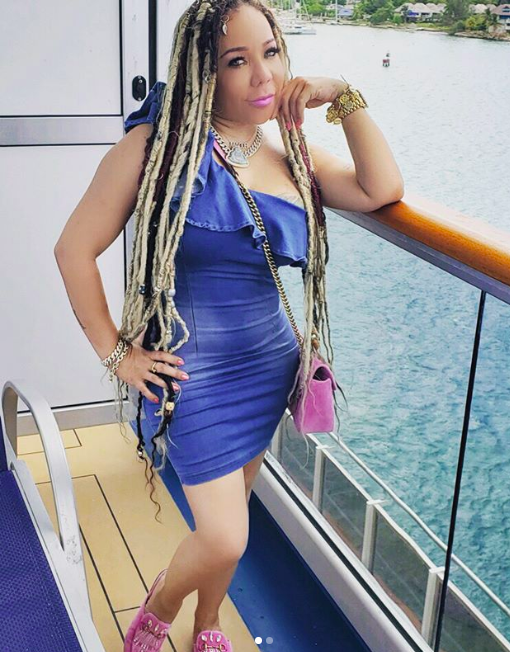 We’ve been rooting for Xscape singer, Tameka “Tiny” Harris, and husband, T.I., in spite of that thin thread their marriage has seemingly been hanging on by for the past two years or so. Why? Because it’s evident that after almost two decades together (since 2001), they share a love so pure, that no side-chick can ever dilute it. Speaking of side-chicks, T.I.’s latest marital hiccup, has landed him in the doghouse -if not by Tiny, then definitely by her millions of female fans. That may have a lil’ something to do with what T.I. has just gifted Tiny with for her birthday…

T.I. has always bought Tiny lavish birthday gifts and we know this because they’re a very public couple that shares those precious moments with fans. This go ’round though, Tip seems to be working hard to buy his way outta that unspoken doghouse, to make up for the public embarrassment his latest cheating scandal caused Tiny.

It Was A Last Minute Effort

According to a ATL Custom Auto Sales’ rep, named True, this was an overnight job. Why? because apparently Tip waited until the last minute to decide to purchase a car for Tiny. True said T.I. called them a ‘little after 2 p.m. Friday (June 13),’ saying he needed the new whip by Saturday (Tiny’s June 14th birthday). Ain’t that a blip?!!

Nonetheless, Tip was able to pull off his last minute efforts without a hitch. They were able to finish the job by Saturday at 1p.m. and when Tiny got the vehicle, T.I. had some extra Louboutin bags waiting for her in the back seat.

She seemed far more enthused than her previous response to him the day before.

Her Prior Unenthused Response To T.I.’s 1st B-Day Surprise

As we previously reported, T.I.’s initial birthday surprise to Tiny, left her unexcited to say the least. After the stroke of midnight, on her b-day, T.I. called Tiny on Instagram Live, to give her a special b-day shout-out, as he was toastin’ it up with his potnas in Las Vegas and Tiny was at home in Atlanta.

T.I. seemed to be having a blast at his festivities. Tiny, on the other hand, seemed almost unimpressed as she held her red plastic cup of whatever up to the camera, to toast with Tip, who was joyfully holding up his wine glass. She unemphatically told Tip, “I need to be in Vegas with you” and “you need to come home”…even though she still unenthusiastically thanked him for the birthday wish.

T.I.’s response to Tiny was that he’s ‘gotta let her do her thing’ – a response that seemed to be an extension of a previous conversation the public didn’t witness. Check out their birthday convo below…

Regardless of Tip’s rush job, the fact that he dropped a few hundred thousand on his wife, clearly earned him brownie points in her eyes. And besides, just like the Old School saying goes, ‘It’s better late than never.’