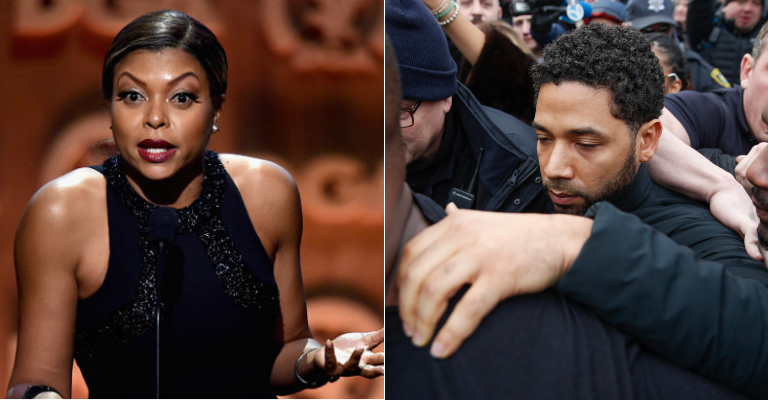 Taraji P. Henson is trying her best to rise above Jussie Smollett’s legal woes and stay focussed on Empire. The Golden Globe winning actress has lifted the lid on life on the set of the hip-hop themed drama. In February, her on screen son, Smollett, was exposed for allegedly staging his own hate attack.

She Tried To Dodge The Question

“It’s a great atmosphere,” Henson, 48, told Entertainment Tonight on Sunday when asked about the controversy.

When asked about her embattled colleague, Henson chose to move the conversation to season five of Empire.

“Cookie’s on a really emotional roller coaster this year,” Henson said of her character, Cookie Lyon. “She’s finding herself.”

When pushed about the Smollett situation, she politely said she couldn’t give too much detail.

“I can’t really talk about that,” the What Men Want actress told the celebrity outlet.

Someone Will Be Killed Off

Henson went on to confirm that someone will be killed off this season. Although she didn’t reveal who it was, the producers of Empire have cut Smollett from the rest of the show’s fifth season.

“The events of the past few weeks have been incredibly emotional for all of us,” said executive producers Lee Daniels, Danny Strong, Brett Mahoney, Brian Grazer, Sanaa Hamri, Francie Calfo and Dennis Hammer in a statement in February. “Jussie has been an important member of our Empire family for the past five years and we care about him deeply,” the producers added. “While these allegations are very disturbing, we are placing our trust in the legal system as the process plays out. We are also aware of the effects of this process on the cast and crew members who work on our show and to avoid further disruption on set, we have decided to remove the role of ‘Jamal’ from the final two episodes of the season.”

Next Page: But Who Admitted The Scandal Had Affected The Cast > > >