ILOSM fam,’ we thought we’d share with you some photos of the daughter of the late, great Teddy Pendergrass- LaDonna Pendergrass. Back in the day she and her siblings were often pictured with their Pops as kids, but now they’re in their 40’s.  LaDonna’s a beautiful down south, ‘sweet potatoes and cornbread-fed’ type of sista, hailing from Memphis, TN and she has no prob’ showing it off. See what we mean below…

LaDonna is now 46 years old. She and her siblings were extremely close to their Pops…they were featured on one of his album covers. Teddy once described LaDonna and her sister, as “Daddy’s girls” and his son, Teddy II, as his clone. They are all just months apart in age…we’ll explain that another time. But as y’all can see, LaDonna is all grown up now…

LaDonna Pendergrass is a hospital technician. After seeing her pics, suddenly we feel like singing The Commodores’ lyrics: “She’s a brick- HOUSE! She’s mighty, mighty…”

Like we said, LaDonna is a beautiful woman and she has no problem letting the world know… 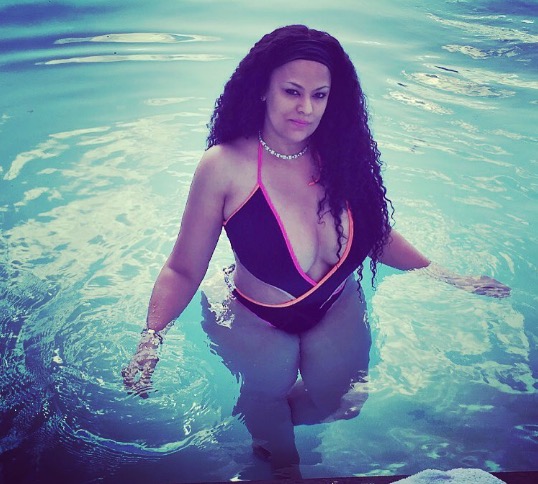 Ever since Teddy P. passed away in 2010, his children have been in an ongoing battle with his wife, Joan, over their Dad’s estate. Teddy met Joan in 2006 and married her in 2008. In 2015, LaDonna and her siblings filed additional court docs to challenge the authenticity of the will Joan Pendergrass submitted to the courts on behalf of Teddy P. The family spoke to The Philadelphia Inquirer about the issues they’d been having with their Dad’s wife over his estate:

“She was married to my dad for only a year, and she has turned my family upside down. All we want is what’s right,” said LaDonna.

“We [Joan and Teddy’s children] simply don’t see eye-to-eye. What I do know is my father did what he intended to do – and that is, put me in charge for the family,” stated Teddy P. Jr.

Teddy P. adored his kids and took pride in providing for them, he stated it himself. So based on his close bond with them, it’s understandable why his kids question a will that only leaves a wife of 2 years as the sole beneficiary of his estate and all future earnings. However, as of 2018, a judge ruled that Joan’s will was accurate and the will Teddy P.’s children presented to the courts was seemingly forged, leaving the music icon’s children with pretty much nothing.

Wishing Teddy Pendergrass’ children them all the best going forward.