For years, most of us, Guy fans, have known about the on-again-off-again tension between the members- Teddy Riley, Aaron Hall and Damon Hall- but we never knew the TRUE reason behind their breakup. Now, Teddy has given the real reason in a new interview with “The Breakfast Club” and it dates back to a very tragic incident that went down back in the day, involving New Edition.

The Tragedy That Led To Their Breakup

Teddy Riley: “Guy broke up because my best friend was killed. And the situation we had with New Edition in 1989…it started in North Carolina. It was a situation where New Edition walked on our stage while we were singing “Piece of My Love.” … We didn’t know what was going on.

So, when they walked on the stage we were just dumbfounded. All we heard was like, ‘Yo, don’t hold me back! Yo, what’s up Ted?!!’

Now, how that happened, [was] it started from there and it went to Pittsburgh.”

The tension between Guy and N.E. was never between the actual singers, but sparked by others in both camps:

“It was never no actual beef with the principals, it was in the backline. One of my guys kicked their…tech guy 10 feet off the stage. … He did it because that particular day, New Edition was supposed to go on before us, but they were late.”

Teddy then explained how promoter, Al Hayman, and label exec, Gene Griffin, had already pre-determined which nights each group would alternate being the closing act:

“So that was the day that New Edition was supposed to go on first. When all this happened, it continued in Pittsburgh.”

By the time Guy arrived into Pittsburgh -hours after their crew had- that’s when Teddy was hit with the tragic reality that his best friend had just been shot FOUR times right before they’d arrived to the city:

“When we drove into Pittsburgh, it was all on the news: ‘Guy by the name of Anthony B. from Harlem, NY, dies in the revolving door of the Marriott Hotel. And the guy that shot him was a pro because he didn’t miss, not one shot. […] “[Shot] four times through the heart, through the back. … It took him out right away.

And this guy, my best friend, he was my confidante, like, he did everything; he was the big homie. He was the one that kept me off the streets, after I got busted [for selling drugs back in the day]. … He was just my guy! … He just wanted to get outta the streets and I was the guy to help him,” Teddy said somberly. “He had groups, he wanted to get into the music business and I said ‘This is good, I’ll help you,’ because he helped me. With keyboards, if I needed something, he’d buy it and he wouldn’t even tell me, he’d just show up.”

Nobody Came To The Funeral

Teddy then explained that “nobody,” including his Guy members- Aaron and Damon Hall, attended his friend, Anthony’s, funeral. That’s what hurt him even further and he decided to leave the group:

“So, with someone like that I’d loss..I just said, ‘Ya know, no one cares, but I do.’ I went to the funeral, nobody came to the funeral.”

Teddy stated that his final decision to leave Guy was because when his best friend was murdered by N.E.’s crew, “they weren’t there for me.”

How Michael Jackson Helped Teddy At The Time

“Michael Jackson called…everything happened at the same time. …I asked Q-Tip if I could use his [studio] room to make music for Michael. I didn’t tell Michael I was quitting the group. We [Guy] had a show at the Madison Square Garden and that was my last show with Guy, 1990.”

This is so incredibly sad. The bright side for Teddy at that time, is that a few days after his last show with Guy in 1990, he flew to where MJ was and created one the greatest musical masterpieces of his entire career- Michael Jackson’s 1991 Dangerous album, which has sold over 32 million albums worldwide. 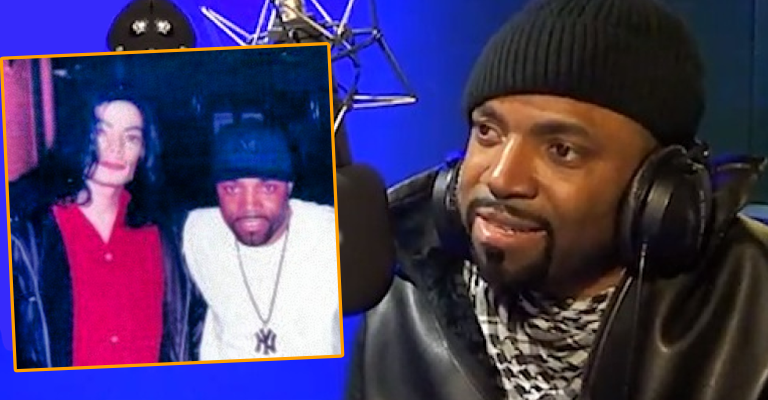 By the way, we reported details of that tragic Guy-New Edition altercation a while back. If you missed the intricate details of what transpired, see it HERE.

Needless to say, Guy’s breakup left a bad taste in Aaron’s mouth, as he watched his former homie, Teddy Riley, soar to new heights as a hit-making producer. Aaron’s disdain for Teddy became so prevalent, that it eventually spilled over into interviews and such. But things done changed now…

In recent years, Teddy, Damon, and Aaron have let bygones be bygones, with their brotherly reunion. They’ve been performing together at sold-out concerts, just like they did back in the day.