We’ll start this off with a collective “PREACH Nia Riley!” Okay, now that we’ve gotten that outta our system, let us tell you why we’re cheering on mega-producer, Teddy Riley’s, daughter at this present time.

Nia Riley, who is a cast member on Love and Hip Hop L.A., has gained a few pounds since we last saw her and quite frankly, we’re LOVING every pound she’s added. Unfortunately though, there is one hater fan who thinks Nia is now too large, so they decided to try to fat shame her like only a true hater can.

It all started after Nia posted the below photo of herself in a bronze bikini, looking all kinds of ‘sexual chocolate’…

Soon afterwards, her hater fan sent this message to Nia: 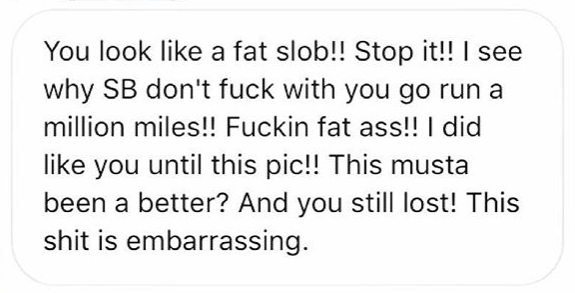 But Nia gave ZERO you-know-whats and instead clapped back at the fan with much style and grace, while schooling them at the same time. Here is Nia’s response to fan hater:

@niariley: Just an FYI this is the exact reason young children kill themselves over social media. I’ve gained too much self love for this to effect me these days. But as I read this I imagined someone saying this to my daughter and her feeling hurt or like she’s ugly, fat, unwanted or whatever the case may be and it infuriated me. Our kids and even adults are killing themselves or falling into states of depression for things less than this. Know what you’re doing before you do it. Please don’t be the problem. What would possess you to have such anger toward a stranger or someone that’s never done anything to you?! A grown ass “MAN” sent me this btw. lol, he gets no pussy clearly worried about my fine ass at this time of night! #RealBody

Betcha that fan will think first, before trying to come at her again. Keeping doing your thing Nia Riley, with your beautiful self!