Here, at ILOSM, we dig Terrence Howard. The brotha is one of the most talented actors in the game. However, as y’all already know, sometimes we’ve gotta call a spade a spade when we see fit. So in advance, no offense to T. Howard, but what you’re about to witness from him, may make him seem more weird than spotting Stacey Dash at an Al Sharpton event.

On “Empire,” Terrence plays the hell outta his gangsta “Lucious Lyon” role. In real life, T. Howard is on the whole OTHER side of the spectrum. In fact, dude is sitting in his own lane, or maybe his own world…or galaxy even.

In a prior interview with Rolling Stone, Terrence introduced his new number system he’d been working on for years, which he refers to as ‘Terryology.’ He refused to fully reveal his secret system and his logic behind it, until it’s patented. But in a nutshell, it is his belief that everything we know about mathematics is absolutely wrong and that his ‘Terryology’ numbers system is correct. For example, he believes that 1×1=2 and adamantly will argue with anyone who thinks otherwise. Let him explain below:

“Since I was a child of three or four,” [Terrence Howard] says, “I was always wondering, you know, why does a bubble take the shape of a ball? Why not a triangle or a square? I figured it out. If Pythagoras was here to see it, he would lose his mind. Einstein, too! Tesla!” He shakes his head at the miracle of it all, his eyes opening wide, a smile beginning to trace itself, like he’s expecting applause or an award. And all you can do is nod your head and try to follow along. He just seems so convinced that he’s right. And that he is about to change the world. “This is the last century that our children will ever have been taught that one times one is one,” he says. “They won’t have to grow up in ignorance. Twenty years from now, they’ll know that one times one equals two.”

“We’re about to show a new truth. The true universal math. And the proof is in these pieces. I have created the pieces that make up the motion of the universe. We work on them about 17 hours a day. She [wife, Mira Pak] cuts and puts on the crystals. I do the main work of soldering them together. They tell the truth from within.”

He also revealed that the reason he dropped out of Pratt Institute in Brooklyn- where he was studying chemical engineering- after an argument he had with his professor over his ‘Terryology’ mathematical belief:

“How can it equal one?” [T. Howard] said. “If one times one equals one that means that two is of no value because one times itself has no effect. One times one equals two because the square root of four is two, so what’s the square root of two? Should be one, but we’re told it’s two, and that cannot be.” This did not go over well, he says, and he soon left school. “I mean, you can’t conform when you know innately that something is wrong.”

Howard’s Fans Let Him Have It Over This

In 2017, he also had a little back n’ forth with his fans who called him out over his number system after he tried to back it up on Twitter:

This is the proof to the World of Science and Mathematics that 1×1=2.#mathematics #worldofscience @rollingstone #proof pic.twitter.com/7uOMrNshia 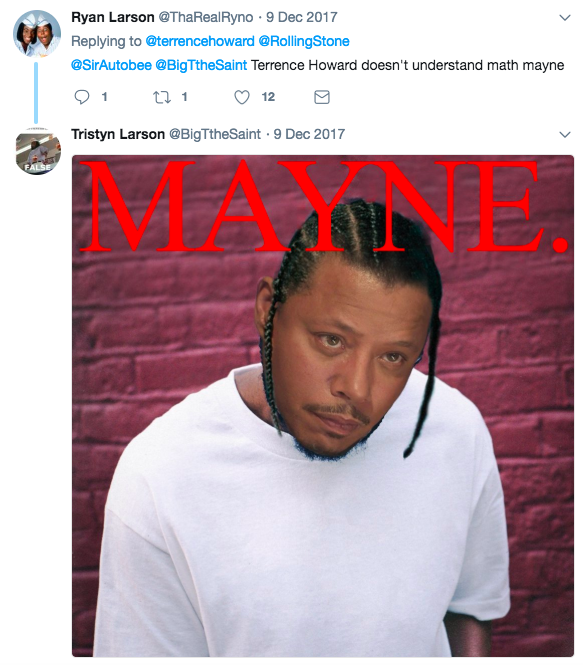 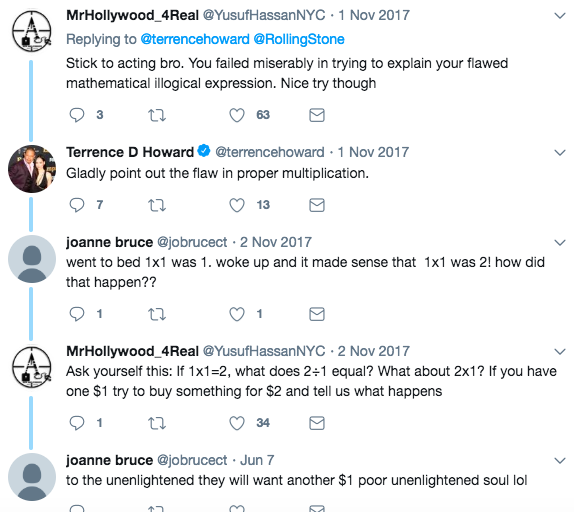 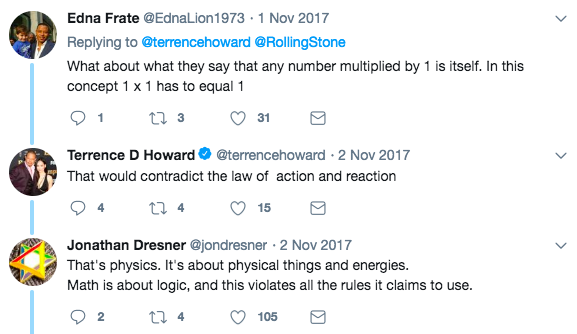 And there you have it folks: A quick lesson in ‘Terryology’ and why 1×1 no longer equals 1, but rather, 2…according to Terrence Howard.