Man, when it rains it pours! While actor, Terry Crews, is battling it out with his alleged sexual assaulter/Hollywood executive, Adam Venit, and his old agency, William Morris Endeavor (WME), a man, whom Crews calls a former friend, is trying to squeeze the Brooklyn Nine-Nine actor for $1 million. You’d think that people would have learned by now, that the 2017 TIME Magazine “Silence Breaker” ain’t about that life. If you come for Terry Crews, he’s telling everybody about it on Twitter–even on Christmas Day.

Terry posted an epic thread putting the man who is squatting on his website domain name, terrycrews.com, on front street. The “mirroring sociopath” apparently befriended the actor, pretending to share many things in common with him “in order to manipulate and control” the friendship. Terry said that he ignored the signs until it was too late, but decided to put his fans up on game so we could avoid this kind of a headache:

The former friend squatting on my domain name https://t.co/7GGWGKPEMP has decided-because of r/CrewsCrew pressure-to offer a settlement of 30% of the original 1 million dollars he wanted.

According to Crews, this cat is a real piece of work. He would brag about trying to kill his college roommate, by poisoning his peanut butter with mercury, just to let Terry know just how far he would go to get revenge if he ever double-crossed him. 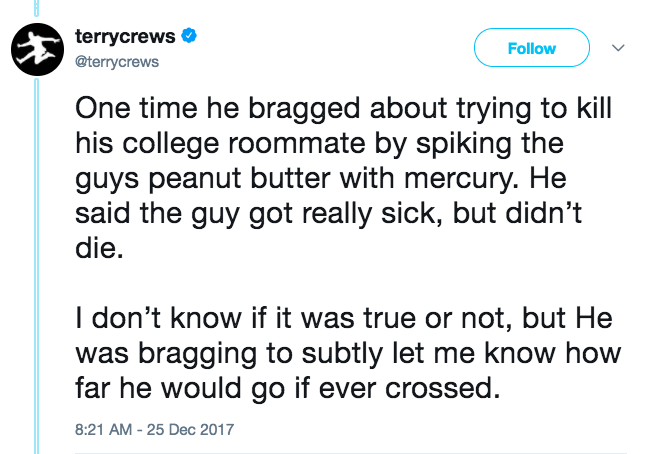 The more time they spent together, the more aware Terry became of his unscrupulous activities. Crews said that this dude sold illegal drugs and Amway products at the same time. He always tried to steer the guy back to the straight and narrow unsuccessfully. 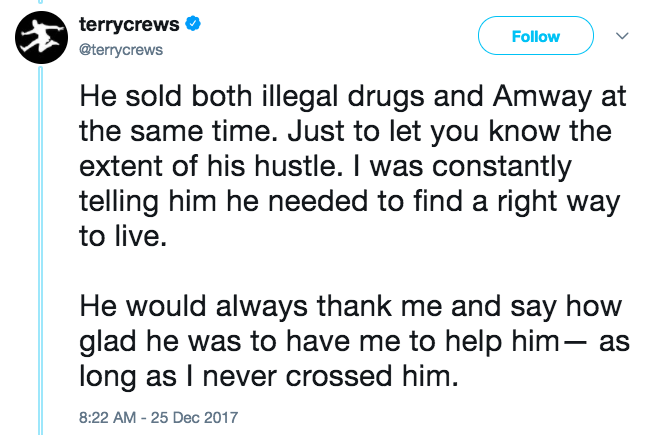 For Crews, the straw that broke the camel’s back was the guy’s foray into building pornographic websites- something Crews is apparently against. So, that’s when Crews says he had to part ways with his friend.

“Hey, man. You could ruin this guy’s life.” Very clever. That’s a very clever thing to say. But he ruined it when he did it. “ @time PERSONS OF THE YEAR Honored to stand among these strong,brave individuals to fight for what’s right… and take our lives back.

Terry calls this the “friend hustle,” ya’ll. He said that if you see the signs from people in your personal life, then you should “RUN AWAY.” The real gift here is the power of transparency. If we publicly own our mistakes, abuses, and even questionable affiliations, it takes the power out of the hands of others. We can control our own narratives and keep people from exploiting us. Real friends don’t try stunts like these. Take heed to this advice on this. It’s good…

I hope I’ve given you a gift you can use to help live your best life!