After reading what John Legend’s wife/model, Chrissy Teigen just did for a stranger, you will probably end up a lil’ misty eyed. As far as the woman she helped, misty eyed is an understatement.

The young lady’s name is Mercedes. She’s from North Carolina and goes by the name @CruzanChoklate on Instagram and Twitter. She often chronicles her aspirations on social media and anyone following her knew that she has dreams of becoming an esthetician one day.

In hopes of making her dream come true, she recently started a YouCare account to help raise money from her family and friends, to cover the $5,995 tuition fee she need to obtain her license as an esthetician ( a skin care expert).

Shortly after starting her YouCare fundraising account, something happened that Mercedes could not believe – her goal was met in no time flat. And who did she have to thank for it? Chrissy Teigen, who posted this to Mercedes’ YouCare page:

Chrissy Teigen: “I’ve seen this be your passion for such a long time now. So excited to see you fulfill your dream!” 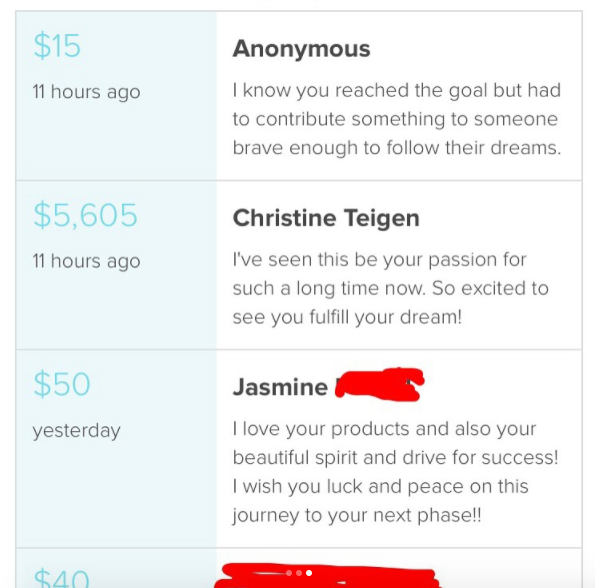 Mercedes immediately took to Instagram and Twitter to document the miracle and cried her heart out with joy. Read what she wrote below:

@cruzanchoklate: Something absolutely amazing happened last night. Many of you know how much I love skin care and my plans to attend esthetician school next month. Last night I posted my tuition fundraiser on twitter and something I never in my wildest dreams happened. My paypal alert went off, and as I looked at my phone, there was amount of $5605. I thought it was a glitch. I then look at my email and realized it came from my fundraiser. @chrissyteigen donated my entire tuition money for school.

@cruzanchoklate: I have been crying all night and I cried in the office this morning as I paid my downpayment for esthetician school. I haven’t been this happy in a very long time. Thank you Chrissy and thank you to everyone else who voted or rtd my link or have supported me this entire time. It means more to me than you’ll ever know. 💜💜 #ixorabb #futureesthetician

She the tweeted a big thank you to Chrissy Teigen: 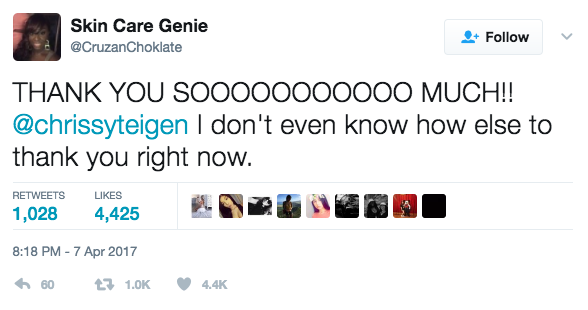 Chrissy tweeted her back and made her day:

Afterwards, Mercedes could not stop expressing how touched she was by the whole ordeal:

Don't ever give up on your dreams, man. I don't think I've ever wanted something so bad in my life. I been speaking it into existence.

The best part was calling my mom and telling her. She was in as much disbelief as me.. lmaooooo

If I ever meet Chrissy Tiegen in person, I'm giving her the biggest hug on earth.

Major props to John Legend’s wifey for her extreme generosity. After seeing that young lady go after her dream hard for 6 years strong by building her skin care brand online, a random act of kindness has made her journey that much more solidified on her road to success. Like my Momma would say ‘Look at GAWD! Won’t HE do it?!!’