“Thelma” Revealed Extremely Painful Experience She Had With Her Mom

Good Times actress, Bern Nadette Stanis, affectionately known to us Good Times fans as “Thelma,” spoke about one of the most painful and heartbreaking memories she had of her beloved Mother, Eula Stanislaus.

In her book, The Last Night: A Caregiver’s Journey, Bern Nadette discussed her parents’ relationship and how they nurtured her career, her education, and her success, but the book’s primary focus is on her Mother, who had Alzheimer’s disease and also on how Bern Nadette took care of her throughout that journey.

Bern Nadette’s father was ultimately murdered, leaving she, her siblings, and her mother to band together even more, but when Eula’s Alzheimer’s disease began to worsen in her elderly years, so did her memory of those she nurtured and loved the most. Her condition had gotten to the point to where Eula could not even recognize her own daughter, the one she so adored and whose acting career she guided. Bern Nadette recalled one of her most painful memories that occurred with her Mom while the two were spending a quiet evening at home doing what they liked to do often- watching an episode of Good Times. See what Bern Nadette revealed:

(via BlackDoctor.org) ‘She speaks lovingly of her parents. “They were very, very wonderful parents,” Bernadette laughs as she recalls how good they were together even though they were opposites. “Mommy was from Louisiana – ‘a Southern little doll’ and Daddy was from the West Indies and he had that fire going!”

When her mom was in the later stages of Alzheimer’s she was watching Good Times with Stanis one day, a show she loved to watch. Thelma and JJ were having one of their usual spats when her mother turned to her and said, “That’s a cute little old girl.” It was a devastating blow that made all too clear the progression of the disease.

“It hit me so hard that my mother did not know that was really me, and it was her that put me on that show and she gave me the face of Thelma. So I said right then and there, I am going to use the same face to put on Alzheimer’s and fight with that! I’m going to fight and hopefully educate and make aware of what it is and what this thing has going on, the characteristics of it, and hopefully we can find an answer to slow it down and stop it eventually.”’

Bern Nadette’s mother passed away in 2011 and since then, Bern Nadette has started her foundation, Remembering The Good Times, to educate people about Alzheimer’s disease and raise money for it’s cure. She is determined to spend her life doing anything she can to use her fame and her face for the cause.

This is what Bern Nadette said about her Mother’s death and how she wrote a book in her memory:

“My mother died October 6th, 2011.  I started writing a few lines of this book at that time, but every time I would write a page or so  I could’t finish my paragraph, sentence or thought without crying.  I told myself, “If I don’t continue through this pain, this book will never get done.” I had writer’s block and I didn’t know how I was going to make it through to the book’s completion.”

On when she realized her mother’s health was beginning to deteriorate:

“I knew something was going on but it was only slight forgetfulness of things. I really noticed a change when she stopped cooking. She would always order in. Her clothes were not put together the way I knew she could, and her hair was untidy. I decided it was time for my mom to come live with my family and me. We were all eager to have her because my family and I had discussed this many times before. I watched mom go from a person very concerned about everything to a person less and less concerned. That’s the way it appears but her love and concern for me still remain even today.”

Bern Nadette on her relationship with her mother and how she dealt with the heartbreak of her mom’s condition:

“Mom has always been my absolute best friend and she has always called me her psychologist. Everyone in our family always knew it was me and mom on everything, mother and daughter and best friends.

This disease is a hurtful one because you miss the way things were, but if you accept the way things are now you can still have a great time together as we do. I am mom’s caregiver, and I just make the adjustments as we go along. I have cried for us both but mother in her deep wisdom always knows how to dry my tears. She will say, “You are a good person. You’ll make it. You’ll be alright”. Can you imagine? Now this is a mother’s love and a daughter’s joy.” 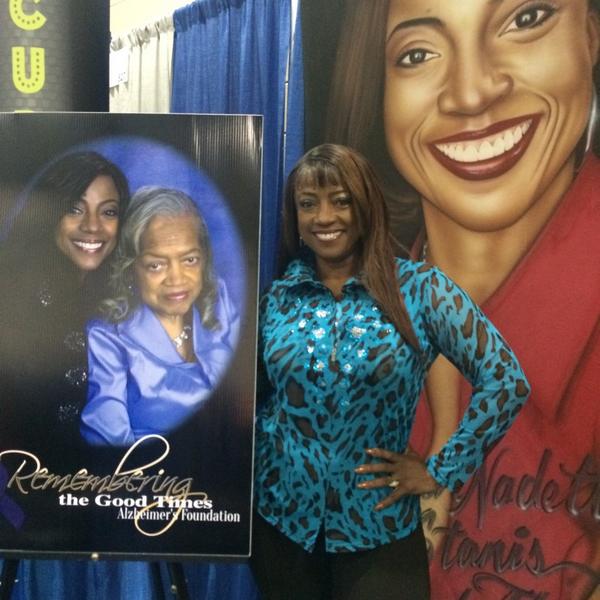 It is so beautiful to see Bern Nadette be determined not to allow her beloved Mother’s death be in vain. Her purpose on Good Times was to represent an untapped dynamic of a young, beautiful, intelligent African American girl growing up in the ghetto. Now her purpose in life is to remind everyone that no matter how tough the fight may get as we walk through our life’s journey, or as we help the journey of a loved one who may be ill, don’t ever forget to remember the good times because that will help us to understand and appreciate our current situation, regardless of how bleak things may seem at face value.