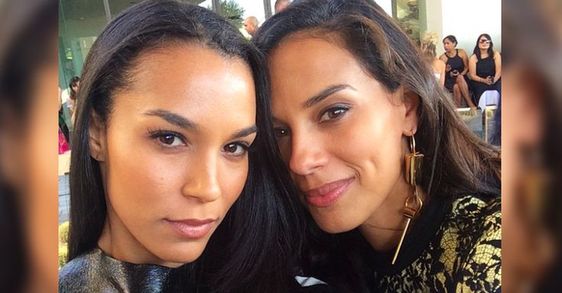 The young ladies pictured above are two of their mother’s pride and joy. We ALL know their Mom very well. Their ’70s/’80s disco Mom has had national and international success, sold millions of records and is worth an estimated $75 million.

This probably isn’t an easy one, so if you got this one right, you’re good. Scroll down to see who she is…

Their Mother is the late, great Donna Summer! The “Love To Love You Baby” and “Last Dance” soul disco queen! A hand clap to whoever was able to get this one right.

Donna Summers actually has three daughters. Get the scoop on  Mimi, Brooklyn and Amanda — below…

Mimi Sommer Dohler is Donna’s eldest child. She’s 49 years old (born in February 1973) and her father is Donna’s first husband, German actor Helmuth Sommer (pictured below). Mimi, along with her two younger siblings, Brooklyn and Amanda used to sing background vocals on the road with their mom. Mimi is married with 4 children of her own now.

Brooklyn Sudano is Donna’s second born. Her father is Donna Summer’s husband, Bruce Sudano. She’s 41 years old (born in January 1981) and is an actress, singer and dancer who is probably best known for playing the role of “Vanessa Scott” on the ABC sitcom, My Wife And Kids (starring Tisha Campbell and Damon Wayans) and “Felicia” on the TV series Cuts.

Brooklyn graduated as the valedictorian of her high school, then went on to attend Vanderbilt University and eventually studied at Lee Strasberg Theatre and Film Institute in New York. She’s also modeled for Clairol, K-Mart and Clean and Clear. Donna Summers featured her on her song “Brooklyn,” from her I’m A Rainbow album.

Donna’s youngest daughter, Amanda Sudano is 39 years old (born in August 1982), and she’s also the daughter of Bruce Sudano. She has modeled for Louis Vutton ads, but she is most known for being in the successful pop singing duo group, Johnnyswim, with her husband, Abner Ramirez, with whom she has a toddler aged daughter. Check out their video below…

Donna Summer would be so proud of her children, may she continue to rest in power.