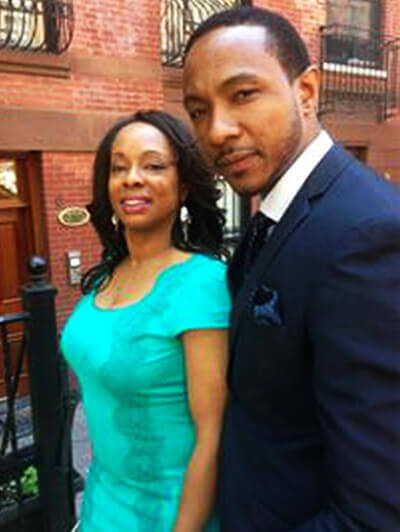 She is the wife and he is the son of a very popular actor who is most known for his roles throughout the 70’s. This Old School celeb was known to play many roles where he was a smooth talking,’ no jiving (like we used to say back in the day), sex symbol type of cat. Ladies would fall out at the mere thought of this dude and the fellas wanted to be like him. Take a real good look at he and his wife’s son (the clue is in his eyes) and see if you can pinpoint who his Pops is.

Scroll down to see if your guess is good… 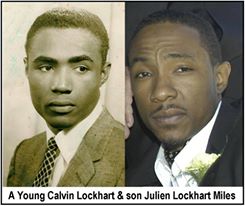 BAM!!! It’s the late, great Calvin Lockhart a.k.a. “Biggie Smalls” from the 70’s classic, Let’s Do It Again. Speaking of Let’s Do It Again” what was your favorite scene from that movie? One of our favorites was the scene whereKansas City Mac (John Amos) and Biggie Smalls face off at the boxing match when Smalls told Mac “One of these days I’mma climb all over you” and then Mac laughed and said “You got ta bring a$$ to get a$$” That was CLASSIC! Check it our below…


Okay we couldn’t resist reminiscing about one of Calvin’s most memorable roles, but let’s get back to his son and wife.

His wife is a New York interior designer by the name of Jennifer Miles. His son, Julien Henri Lockhart Miles, is a 37 year old graduate of Dillard University in New Orleans and where he currently resides.

Jennifer and Calvin met in 1979 and had Julien in 1981. They ended up marrying 25 years later in 2006, with Julien walking his Mom down the isle and giving her away to his Father…beautiful isn’t it?

Calvin Lockhart’s son, Julien, does a lot of independent film work, and he is a hip hop artist who performs at various venues on occasion…his rap style is cold by the way. Julien is also in the process of developing an online TV Show and he and his girlfriend, CR, have created the Hip Hop Film Festival NYC, which is a festival that showcases independent film makers who have the ability to make film meet the narrative of the Hip Hop generation.

After Calvin passed away in 2007 at a Nassau, Bahamas hospital from stroke-related complications, he was survived by not only his son Julien, his third wife, Jennifer, but also his other son, Michael Cooper; his daughter, Shari; his mother, Minerva Cooper; three brothers, Carney, Eric and Phillip Cooper; and two sisters, Delores Bain and Melba Styles.

It’s been reported by The Guardian, that Calvin’s stroke wasn’t his first health scare, but that he’d had scare around 1979 when he suffered a heart attack after learning that his son- whom we’re not sure if it was his other son Michael or another son we do not know about- ‘jumped under a train and ultimately lost the use of his legs.’  That is a tragic situation that would send any parent into some type of health scare and we hope in the end that things got better for his son.

Calvin’s family pretty much stays out of the public eye, with the exception of Julien and his mother, Julien, who continue to pay homage to him on their social media pages. In fact, Jennifer recently posted this photo and message about her beloved husband Calvin Lockhart on her Facebook page:

We agree with Jennifer, Calvin Lockhart will forever be one of the best actors of the 70s era. He brought a charisma to his work that was unmatched, and he made every line he ever recited a memorable one, no matter how small, or large his roles may have been. Throughout films, like Uptown Saturday Night, Let’s Do It Again, and Cotton Comes To Harlem to him becoming the first African American to play a lead role with the Royal Shakesphere Company, he displayed his range as an actor. May Mr. Lockhart continue to rest peacefully after a job well done here on earth.