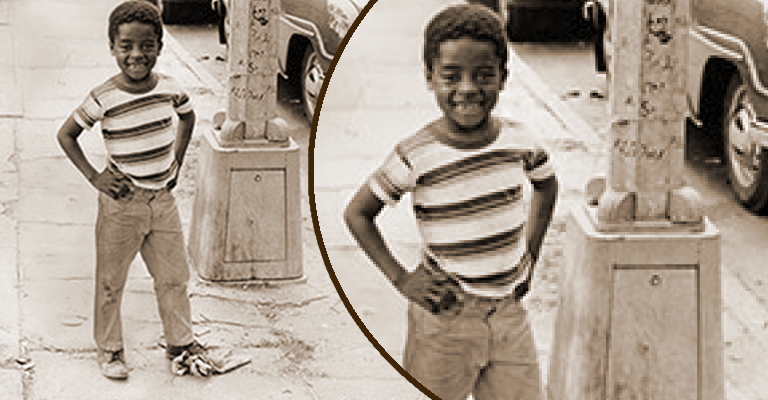 This happy-go-lucky kid in the photo grew up to be one of the most controversial celebrities in entertainment. Although he is loved by millions, he is also hated by many. Throughout his career, he never seemed to really give a d*mn though, and that is why his fans love him. If you guessed Spike Lee, you were right on point!

The childhood photo of Spike in all his swagged out glory, was snapped when he was still running around Brooklyn, NY and going by his birth name, Shelton Jackson Lee. Little did Brooklyn know, a controversial, legendary filmmaker was being bred right there in their presence.

Speaking of Spike and his controversial ways, by now we all have probably heard that Spike is one of the many mega-celebs who vowed to drop this year’s Oscars like a bad habit, but something else we found to be just as interesting is that in November 2015, Spike was awarded an honorary Oscar at the Academy of Motion Picture Arts and Sciences’ seventh annual Governors Awards. What makes it interesting is that in true form of the man whom folks love to hate, Spike once again, didn’t give a damn about what the Oscar execs thought of him, as he shamed them during his acceptance speech at their own event. The award was presented to him by his long time friends, Denzel Washington, Samuel Jackson, and Wesley Snipes.

Staying consistent with what he has been stating- that our problem doesn’t begin with the Oscars, it starts in Hollywood- Spike blasted Hollywood and the Oscars organization for their lack of diversity in all forms-in front and behind the camera. The conservative crowd sat there almost in shock that Lee picked such a time to voice his frustration- a time when some thought that he should have just been grateful for a trophy, as opposed to staying true to his values and concerns about the industry. Read a part of what he said here and you can check out his full acceptance speech in the video below:

“I don’t know if you noticed, but the United States Census Bureau says that by the year, 2043, White Americans are gonna be the minority in this country. And for all of the people out there who are in a position of hiring, you better get smart ’cause you’ll work for us. You should reflect what this country looks like.

And I’mma get real here, everybody in here probably voted for Obama but when I go to offices, I see no Black folks except for the brother man at the security who checks my name off the list as I go into the studio. So we can talk ‘yabba yabba yabba’ but we need to have some serious discussion about diversity and get some flavor up in this. This industry is so behind sports it’s ridiculous.