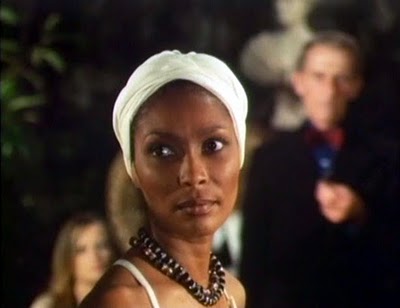 If you love 70’s TV shows and films, you probably remember seeing the beautiful actress, Marlene Clark, in at least one of them. She starred in several African American films throughout the 60’s and 70’s, such as Night of the Cobra Woman, Switchblade Sisters, Black Mamba, and others, but her most popular role to date is probably that of “Lamont’s” (Demond Wilson) fiance’ on Sanford and Son.
Here’s a quick reminder to freshen up your memory of her role: Marlene played “Janet Lawson” on Sanford and Son, who had a 12 year old son from her previous marriage. At first “Janet” and “Lamont” were head over heels in love, but then started to have their doubts about getting married. After “Lamont” started having second doubts about having ready made family with “Janet,” and after “Janet’s” husband returned to town and wanted to get his woman and his family back, “Janet” also had second doubts and was torn between Lamont and her ex. So they called off the wedding.
Just as fans were getting accustomed to seeing “Janet” on the show, she was soon gone out of “Lamont’s” life. But in real life, Marlene was just getting started. A few years prior to her 1976 appearances on Sanford and Son, she had gotten married to one of the most popular actors of the 70’s era, but many people never knew they had a thing going on. This certainly was news to most of us over here at ILOSM.

Who Is Her Ex-Husband?

Marlene Clark’s ex-husband is the legendary Billy Dee Williams! Who would have thought it? They actually made a good couple back in the day, but their marriage didn’t last past 3 years. They were married in 1968 and divorced in 1971.

Marlene didn’t let her divorce stop her though. For a few years after that, she kept it movin’ with her acting career. In fact, after her divorce, she landed even more acting gigs than before, which not only included Sanford and Son, but also TV shows, like What’s Happening and Barnaby Jones.
Here are a few very interesting Old School facts we found out about Marlene, based on an interview she did some years ago with Chris Poggiali:

1. SMH…She was almost ‘gang raped’ by a group of little people on a movie set.

Yep, you read that right. Marlene explained that while working on the set of the 1974 film, Black Mamba, she was almost raped by 24 midgets at one time, during filming! Laaawd!!! Here’s what she revealed about that:

“There’s a scene where I get raped by two dozen midgets, and when they jumped on me, half of them didn’t know they were supposed to be acting. They were all pulling their pants down. I said, ‘Oh no! Whoa! It’s time for me to leave, ‘cause these midgets are really trying to rape me!’ The director said ‘Marlene, wait…’ and started yelling at them, ‘No, this is play! This is pretend!’ I was looking around, like ‘Where’s the plane? Get me on that plane!’”

2. While filming the 1969 film, Putney Swope, Marlene and several of her female co-stars were tricked into doing a topless scene, but she took it all in stride.

“That was my first experience with onscreen nudity,” says Clark, who plays a topless stewardess in the film’s Lucky Airlines commercial spoof. “Bob Downey lied to all of us. He said, ‘Take off your tops. You’re out of focus. Nobody will see anything’ — and we were so stupid, we believed him. Of course, when I saw the movie, I was speechless. Not only was I not out of focus, I couldn’t have been more in focus!” she laughs.

Marlene Clark is no longer in the acting game and the last we heard, she was living a very quiet life in Los Angeles, Ca. She is 66 years young now and a few years back she said that she was really enjoying working at a popular L.A. restaurant as the general manager. As far as getting in front of the camera again, she says she’s open to it, but for now that chapter of her life is closed and she’s grateful for having had those experiences in entertainment that took her around the world and back.
-ILoveOldSchoolMusic, old school news with a new point of view