ILOSM fam,’ if you’ve been following our updates on actors, Tom Hanks and Rita Wilson’s son, then you already know the dude’s rap and acting skills are fire. For those who don’t know, be prepared to be surprised at the offspring of a legend (Tom Hanks), whom many would least expect to have a rapper son.

If you caught the recent episode of  of “Empire” on April 18th (2018), then you were also introduced to the new recurring character, “Blake,” who played ‘Empire Record’s’ newest rap artist, signed to the Lyon dynasty. “Blake’s” rap battle against “Hakeem Lyon” (Bryshere Y. Gray) had everybody talking about the Caucasian dude who was able to hold his own up against “Cookie’s” and “Lucious Lyon’s” son. Check out their rap battle below…

Fans then flocked to social media to give the mysterious new rap character his props. Little do most realize though, is that the dude they’re big upping online, is actually none other than Chet Hanks a.k.a. Chet Hanx a.k.a. Tom Hanks’ and Rita Wilson’s son. 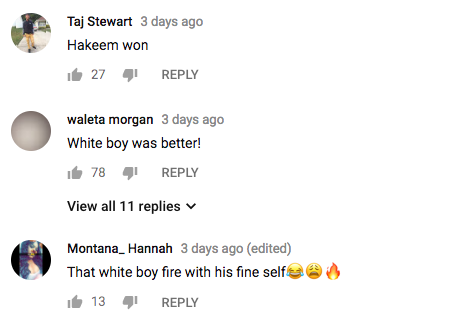 Although Chet was raised in a plush lifestyle, underneath the realm of his famous parents, in a 2015 Instagram post, he said he ‘identifies’ with the Black, hip hop culture more than his own. How that came about? Not sure, but based on his seasoned rap abilities, his affinity for African American women (we’ll get to that in a minute) and his many hip hop and R&B songs he’s released throughout the years, I guess it’s safe to assume Chet is actually living his truth and not just talking it.

One look at his life, in comparison to that of his parents and three Hanks siblings and it’s clear to see that with his faded haircut and his love for Wu-Tang Clan, Chet Hanks is the odd ball in his famous fam.’ Interestingly, his parents couldn’t care less that their son is different from them, they love him just the same, as it should be.

His Precious Biracial Daughter Surprised Many

As we previously informed y’all, Tom Hanks has an adorable half African American grandbaby. How so? Because his and Rita Wilson’s son, Chet, loves him some Black women and thus ended up having his now 1 year old daughter, Michaiah.

Word on the Old School curb is that the Hanks love them some little Michaiah too and that she calls Tom ‘Pappau’ and Rita ‘Yia Yia.’

And of course Chet Hanks loves his 1 year old mini-me more than anything in this world and credits his daughter with being the person who “saved” his life, which was previously scarred by past struggles of drug addiction and wild behavior:

“I know I have not been that active on the gram lately because I have been figuring out my life, which is what we’re all doing. […] I want to share something today… I have a daughter. I do have a daughter.” He also said his child is the “best thing that’s ever happened” to him. “She’s the reason why I turned my life around and got sober,” he said. “I’ve been sober for over a year and a half from everything. I don’t post her on Instagram because her privacy is sacred to me,” he said. “She’s not something to be posted, she’s something that I love. That’s changed my life. It hasn’t been easy making all my mistakes in public but I’m figuring it out. I’m doing the best I can.”

Tom Hanks’s new granddaughter emerges in public for first time after Chet Hanks talks about her in his new song… https://t.co/pusJEYrvEu pic.twitter.com/irh8NyvmJU

We look forward to seeing what else “Empire” has in store for Chet Hanks.