As we all know, Will Smith once played boxing icon, Muhammad Ali…but little did we know, the brotha damn near had an Ali-George Forman “Rumble In The Jungle” moment behind the scenes with “In Living Color,” veteran, Tommy Davidson. According to Tommy, the fiasco was over Will’s wife, Jada Pinkett-Smith. It went down in 1998, as Tommy and Jada were in the midst of filming their movie, “Woo.”

What Had Happened Was…

In his memoir, “Living In Color,” Tommy Davidson revealed that he and Jada Pinkett-Smith formed a very close platonic bond during filming, and would oftentimes have several heartfelt personal talks on set. However, the near-fight with Will was supposedly sparked over something else altogether different…a on-set kiss.

Tommy wrote that he didn’t like the original ending for “Woo,” and the film’s producers agreed.  So, he called a phone meeting with Jada and the producers to discuss his idea for an alternative ending instead: to have his and Jada’s characters dance as the film credits rolled. Everyone liked Tommy’s ending better than the original, and agreed to go forward with his plan.

Though Tommy had previously discussed the kiss he felt his character should do with Jada’s during the dancing scene, he says he failed to mention it to Jada during the phone call:

“I didn’t know this: You have to rehearse a kiss,” Tommy Davidson writes. “You can’t just spring it on your costar … And I didn’t think it was all that big of a deal.” 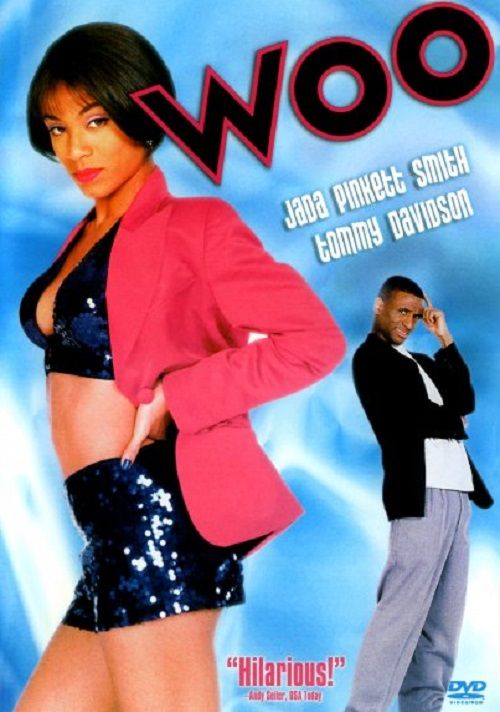 Nevertheless, Tommy Davidson still felt comfortable enough with Jada to lean in for the kiss as they were filming the closing scene in “Woo.” He says as soon as he went for it, he can sense Jada flinching, likely because the kiss caught her off guard.

Needless to say that soon after the scene was wrapped, the kiss didn’t go over so well with Jada’s hubby, Will Smith – who was her fiancé at that time. According to Tommy, Will barged into his trailer and said, “I didn’t appreciate that.” Tommy says he responded by further provoking Will, seemingly in retaliation for Will steppin’ to him like that inside his trailer…things only got more heated from there:

“Will went all gangsta on me, saying what I did was not cool,” Davidson wrote. “There was a moment there when we might have come to blows. My reactive fight-or-flight instinct was triggered and I could have exploded.”

They’re In A Better Space Today

Thankfully, Tommy and Will’s potential “Rumble In The Jungle” brawl didn’t fully cross that line because Jada broke it up. Tommy wrote that Jada followed Will in hot pursuit as he was headed to Tommy’s trailer because she obviously sensed something was about to pop off. Sure enough Jada’s instincts were right, and she was able to step in to get Will and Tommy to calm down.

The great news is that Tommy Davidson says to this day, whenever he sees Will and Jada everything is super cool between them and neither he nor will hold ill feelings toward each other. On a side note, Tommy even took the time to credit Jada’s mom, Adrienne Banfield-Jones — a recovered drug addict — with helping him to kick his past drug habit years ago.