The 28-year-old daughter of “Oops (Oh My)” songbird, Tweet, discussed some deeply heart-wrenching realities that both she and her mother struggled with. Fortunately, both of these two beautiful ladies (who look more like sisters) have overcome their battles, but NOT before hitting rock bottom.

Tweet and Shenice (formerly known as Tashawna) revealed, on The Lexi Show a few years ago, just how strained their relationship became as a result of Tweet’s past alcohol abuse and what it ultimately caused Shenice to do. After hearing this, we gained a whole new respect for Tweet and her not-so-mini-me, Shenice. Check it out below…

I thought it [Tweet’s alcoholism] was normal…I just wanted to help my Mom. […] I didn’t know really what was going on, because I just knew she came home and she was gone for years. So when she came home and was home everyday, I didn’t wake up and she was gone, I was happy with that. But I didn’t like the state that she was in, but being 8 and 9, you don’t really know what to do, but just pray…that’s all I really could do.

My grandmother was my rock through all of it. She was my best friend…she taught me everything.”

‘I THOUGHT MY MOM’S ALCOHOLISM/ANGER WAS MY FAULT’

“I would just ask [my Grandmother] why is she so mad at me? I thought it was my fault…because I’m just like ‘My Mom’s not here, I never get to go with her, she’s so mad.’ We [Tweet and her daughter] never really communicated. So I thought it was just me, so my Grandmother would just keep me in her room, put oil on me, and pray LOL. That’s all we really knew to do- was pray at the time. […] She didn’t wanna tell me anything either because I was young. So she just told me to pray.”

TWEET EXPLAINS HARDSHIPS THAT LED TO HER ALCOHOL ADDICTION BEGAN 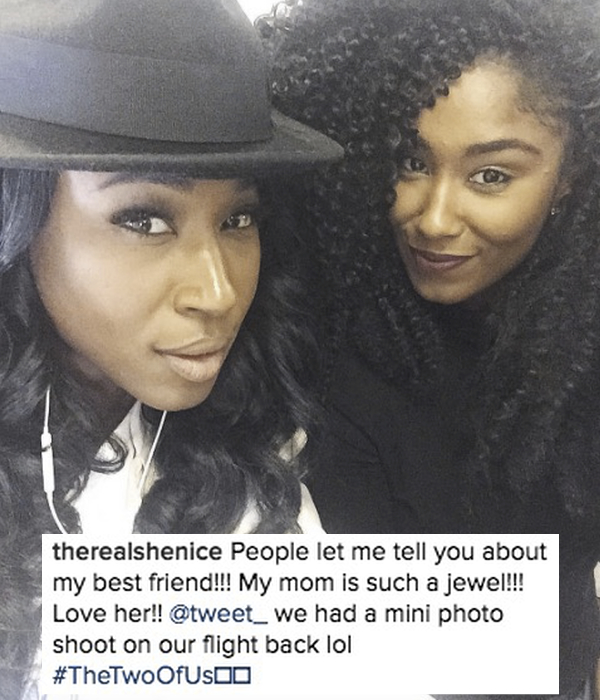 Tweet was a part of Devante Swing’s (of Jodeci) group, Sugah, from 1994 to 2000 and after no success, she left and moved back home with her parents and her daughter and that’s what sparked her alcohol addiction:

“Nothing was coming up [no job]…didn’t have any money, and I remember my father had this old Lincoln. You know the Lincoln where the seats you to pull out and you could find the change in there? Change! I used to get the change and go and buy a 40. And that’s how I started drinking and drinking, and I put all of my problems into a bottle.

Nothing was working out, so that was my solution. [I] started getting very depressed, thinking suicidal, I had it all planned out.[…] I wanted the easy way out, I don’t wanna stab myself or anything like that. ‘Let’s just take some pills…and not wake up.'”

Then her daughter chimed in and revealed her own past addiction>>>

DAUGHTER WAS ‘ADDICTED’ TO BEING BULIMIC & CONTEMPLATED SUICIDE

Shenice explained how she became addicted to being skinny and having to look a certain way to hopefully please others:

“It all goes back to me feeling rejected…I dealt with that from a young age, even with my Dad. […] I just didn’t know what to do. Then “America’s Next Top Model” comes out and I’m watching and this girl is losing so much weight. […] I began to overly eat and then binge. […]I got down to 99 pounds as well. In the 10th grade, that’s when it started and it went all the way up to my freshman year in college.”

Tashawna also revealed that she actually attempted suicide and ended up in a mental hospital for a while.

THEY’RE IN A BETTER SPACE NOW

Thankfully they’ve fully overcome their addictions and have mended their mother/daughter relationship, which they say is a work in progress. They’re a true inspiration to many and we salute these beautiful women for having the strength to speak their truths. See the Instagram message Shenice posted for her mother above.