In the midst of the public outrage following rapper, Meek Mill’s, ridiculously harsh prison sentencing, hundreds of fans and high profiled celebrities showed up to protest outside Philadelphia’s Criminal Justice Center on Monday. Among them were NBA icon Julius “Dr. J” Erving, rapper Rick Ross, and Malcolm Jenkins of the Philadelphia Eagles and some of his teammates.

The 30 year old Philadelphia rapper was sentenced to 2-4 years in prison for violating his parole by, get this, riding his quad bike down a N.Y. street one night.

Soon after Meek’s sentencing, his attorney, Joe Tacopina, publicly blasted the hell outta Judge Genece Brinkley and revealed that her sentencing was a personal vendetta against Meek. According to Tacopina, Brinkley overstepped her boundaries with Meek Mills in many ways throughout the years. She is reportedly very salty with Meek because he declined her request to shout her out in a Boyz II Men remake song, she asked Meek to record. Tacopina also says that Judge Brinkley has been mad with Meek ever since she tried to get him to leave Jay Z’s Roc Nation label and sign with her alleged business associate- a local record label owner named Charlie Mack.

Here’s Why FBI Is Investigating The Judge 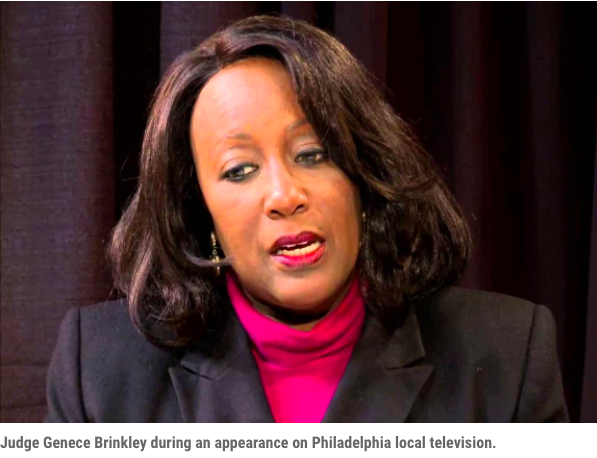 Now, Judge Brinkley is under investigation by the FBI and here’s why:
Charlie Mack is a convicted felon and it is against Meek’s parole guidelines to associate with convicted felons, which is also what Meek and his attorney reportedly told Brinkley at the time of her alleged request. However, according to attorney Tacopina, as well as 2014 court documents that have just surfaced, Judge Brinkley told Meek that she was going to make an exception to allow Meek to do business with Mack if Meek followed her request to sign with Mack’s label.

The FBI is investigating Judge Brinkley because it is against the law for a judge to try to pressure Meek Mill into doing business with convicted felon. According to TMZ, Charlie Mack claims doesn’t know Judge Brinkley, but Tacopina does not believe that.

Attorney Tacopina is also saying that Meek’s entire sentencing should be thrown out, because he’s adamant that Brinkley’s harsh decision was swayed by her personal disdain for Meek Mill due to him rejecting her requests.

Meek Mill’s sentencing was extremely harsh and a petition was started on change.org to push Pennsylvania governor, Tim Wolf, as well as the state’s Board of Pardons to step in and reverse Judge Genece Brinkley’s brutal sentencing. To date, hundreds of thousands have signed the petition. Unfortunately, Gov. Wolf, revealed that his hands are tied because P.A. law doesn’t allow him to reverse decisions in specific cases. All hope is not lost though, there is still the Board of Pardons, which Meek’s attorney plans to seek help from, if Judge Brinkley does not reverse her decision, following her FBI probe.

Philly came out to support Meek Mill at the #FreeMeekMill rally!

Here's a clip of them doing the #DreamsAndNightmares intro.

Do you stand with the cause? pic.twitter.com/OAs7yjEF8S

Why So Many Are Affected By This

Meek’s case is touching so many people, not simply because he’s a celebrity, but because his fame puts a face to the brutal abuses of power that millions of other Black people, and other people of color, are subjected to through the justice system daily. That point was further driven home by ousted NFL quarterback, Colin Kaepernick’s, recent post regarding Meek’s sentencing. So we leave you with this:

Free Meek Mill and all others who are being thrown away by America’s criminal justice system for non-violent violations.