Whaaat? Who Knew Actor, Wood Harris, Is The Brother Of A Well Known Actor?

Wood Harris has been in the acting game for a long time, but you’d probably never guess who his brother is. Although you have never realized it, there’s a strong possibility you’ve seen him if you enjoy the types of movies Wood Harris has been in.
For those who don’t know, Sherwin “Wood” Harris has made quite a name for himself over the years. From memorable hood classics like Above the Rim, Paid In Full, and The Wire to inspirational films like Remember the Titans, and most recently, The New Edition Story Wood has covered a lot of ground. ILOSM fam, we could go on and on about Wood Harris! But, surprisingly, his brother’s career is just as impressive….

Wood Harris’ brother is actor Steve Harris! For those who don’t know, Steve’s acting career began in 1985 and has evolved over the past 30 years. He’s had recurring roles on popular shows like Law & Order and The Practice and he’s even starred in memorable movies like Tyler Perry’s Diary of a Mad Black Woman, Quarantine, and 12 Rounds. Steve, 51, and Wood, 47 were born in Chicago, IL to John and Mattie Harris.

The Harris Brothers Live Well Now, But It Wasn’t Always That Way…

Me and my beautiful mom at the Emmy Awardsa few years ago. My mom has the best smile.

Although the two now live a relatively comfortable lifestyle due to their acting careers, they’ve admitted they weren’t born with silver spoons. They lived normal lives and come from humble beginnings.

“We had a very normal, sort of ghetto, urban upbringing,” Wood Harris recalls. “My father was a bus driver and my mother was a seamstress and a substitute school teacher, off and on.”

Today, the Harris brothers have come pretty far from their humble beginnings and are now successful men. Wood is a family man, and loves his kids!

Here’s a picture of his beautiful wife and daughter: 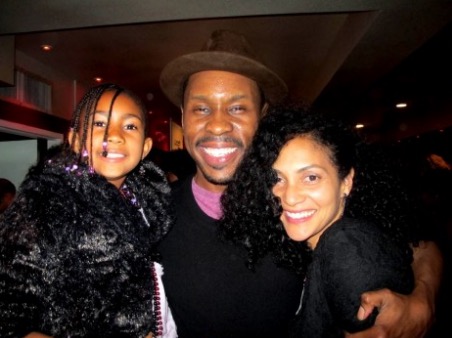 The brothers share the same passion for acting, but when it comes to acting, they’re on two different pages. During an appearance on Arsenio a couple years ago, Steve admitted that he loved old school R&B, like Peabo Bryson and such, while Wood said he was a 90’s hip hop head all day, everyday.

Another thing Wood admitted, on Arsenio’s show, was how much of a positive influence his brother was for him when they were growing up. Steve’s focus on academic success actually rubbed off on Wood.

“I was following in my brother’s footsteps when it came to academics,” admitted Wood. “My brother went to college and I was thinking that I needed to go too. But I only thought that scholarships were only given out to athletes. It was a new thing for me when I got an academic scholarship.”

Hopefully, one day fans will get a chance to see the two brothers in action together.