Myrna Smith, a member of the group, The Sweet Inspirations, sang back up for rock & roll legend, Elvis Presley. Smith had many fond memories of Elvis in which she reflected on his love for music as well as his love for black women, particularly her.

The Sweet Inspirations was an R&B gospel group comprised of four members:  Cissy Houston, mother of the late Whitney Houston, Sylvia Shernwell, Myrna Smith, and Estelle Brown. While they were successful in their own right as a group with many hit recordings, the one song that stood out the song was their song, ” Sweet Inspiration”. Back in the 60’s, that song had many people bopping their heads and tapping their feet. One of the people who loved that song so much was allegedly Elvis himself. According to Elvis.com, Elvis loved the song so much that he contacted the group to have them sing back up for him. The ladies of Sweet Inspiration worked with Elvis in Vegas, on his national concert tours, and on recordings from 1969 to 1977. Aside of Sweet Inspirations, Smith sang back up for Elvis in his Graceland recordings as well. Cissy Houston left in 1969 to pursue her own solo career but the Sweet Inspirations remained loyal to the king of rock & roll. 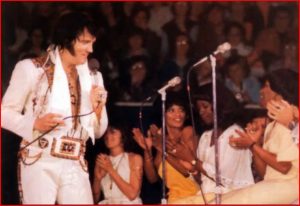 In a documentary called, This Time, Smith admitted that Elvis tried to pursue a relationship with her. This isn’t too surprising as their have been rumors that Elvis was very fond of the ladies. However, it might suprise you that Presley loved black women as he was a rumored racist. Smith dispels those rumors with her open and candid conversation about the love she shared for Elvis. In the video, Smith shared that she and Elvis were often flirty with each other, however, they worked together. Aside from them working together, Smith had a boyfriend, Gregory, that was apart of the band as well. However, that didn’t stop the King from showing Smith love and affection. Elvis’ dear friend, Jerry Schilling, loved Smith too. Unlike the king, Schilling never stopped pursing Schilling and he eventually won her over. Smith even married Schilling briefly from 1982-1987.

It was clear that Elvis loved his background vocalists. Elvis loved gospel and soul music. The Sweet Inspirations did a great job of blending their voices to make a soulful sound that Elvis couldn’t get enough of. Even after singing and performing in concerts, they allegedly would continue to sing and jam all night. Presley reportedly called the ladies his “church sisters”. See a video below where Elvis is having a conversation with The Sweet Inspirations and Myrna is featured in the video.

Up until the day she died, Myrna Smith made a living telling old stories of Elvis and even singing as a back up singer for Elvis impersonators. Despite her financial struggles, she was determined to keep her career and her friendships with her group mates going for as long as she could. According to the documentary This Time, The Sweet Inspirations were hoping to resurrect their fortunes with the help of producer Peitor Angell, however, their fame would never be the same without the original King being alive and well. Tragically, Smith died at the age of 69 on December 24, 2010 from kidney failure. Because of Smith’s memories, we learned two things about the King of Rock and Roll: he loved black ow