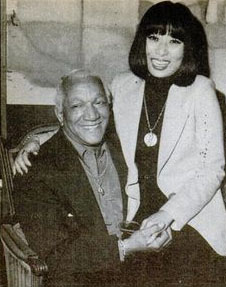 When Redd passed away at age 68 in 1991 he did so with no will in place to divide his funds to his family. He was also $3.6 million in debt. Debraca became responsible for Redd’s estate and his, of course, caused friction between her and her stepmother Ka Ho who felt like she should be the one in charge of Redd’s finances. However, their feud worsened when Ka Ho began accusing Debraca of being irresponsible with Redd’s money. According to Heirs and Successes;

When he died Redd lived in Las Vegas, as he died without a Will Foxx’s daughter, Debraca Foxx, was appointed as the administrator of his estate. Redd had been married four times and his fourth wife and widow, Ka Ho Foxx, accused Debraca of failing to provide accounts of revenue received in royalties, residuals and licensing deals since her father’s death. Ka Ho believed that Debracca had been taking money for herself that should have gone toward paying down the estates tax debt.

Due to this family infighting, in 2006 the Nevada probate court appointed the public administrator to administer the estate. The administrator stated that his goal was to “settle Redd’s estate pay all taxes owed and get money for his heirs”

Next Page: See what happened when they tried to sell his life story >>>