Wow! Della Reese Says Redd Foxx Did WHAT For Her When She Was Broke?!!

Iconic comedian Redd Foxx, has been gone from this earth for 27 years and he’s still considered one of the ‘greatest’ by many of today’s hottest comedians. Let Foxx’s closest friends tell it, there was also an even better side to him that many never knew.

One of those close friends, the late actress/singer, Della Reese, was friends with Foxx for 40 years. In the video below, she told a great story about the time Foxx was working at a club in Pennsylvania. She met with him backstage and confided that she didn’t have a job and needed some money. Wait ’til you see what Della said Foxx did that night, to help her get back on her feet.

Della Reese: “We were hungry together. We were out of work together,” Reese laughs loudly. “We shared sandwiches together. He (Foxx) loved helping others. The public makes him out to be a nasty mouth, mean person. He was the total opposite – a gentle loving person. If you needed something, he would go into his pocket and give it to you.”

According to Reese, the reason Redd was broke at the end of his life, was due to his extraordinary generosity. In a 1983 interview with Tom Joyner, Foxx basically confirmed that claim, stating that he was a “provider” by nature. 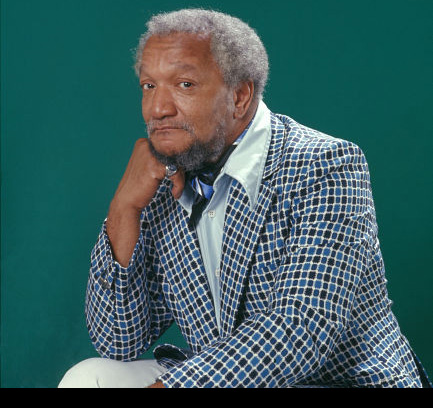 Redd Foxx gained notoriety with his raunchy nightclub acts during the 1950s and 1960s. Known as the “King of the Party Records,” he performed on more than 50 records in his lifetime. While working together as television co-stars of the Eddie Murphy penned “Royal Family,” the man known for a few false alarm heart attacks, succumbed right there on the set during rehearsals. Della was the first to find him and immediately thought it was another one of his gags, but sadly it was the “big one” that time…it was also the day we lost one of the best comedians to have EVER done it.

Foxx’s character as a man, as a person, is something that also changed the lives and the character of the people who’s lives he personally touched. Redd was a great example that reminds us that when we have, we should reach back and give; and when we do that, our journey on this earth will become a greater movement that’ll affect others long after we’ve closed our eyes.

Redd Foxx clearly lived up to his description of being a “provider by nature” and we thank him for all of the years of gracing us with those jokes that produced those hardcore belly-aching, tear dropping, make-you-wanna-slap-somebody laughs! Mr. Foxx, we salute you sir…rest well.

There are several other comedians who have extended that type of generosity to other comedians that they admire throughout the years. Flip the page to see what some of them have done for other comics in the game, like Richard Pryor, and more.