Wow, Prince’s Ex-Wife, Mayte, Details How Their Marriage Was “Bizarre”

Prince’s ex-wife, Mayte Garcia, officially went on public record to admit that her marriage to Prince was the most “bizarre thing ever,” but she wouldn’t trade that experience for the world.
Prince and Mayte met when she was 16 years old, after her mother, Nelle, submitted a VHS tape of Mayte’s dancing to Prince and his team. Maybe and her Mom eventually met Prince backstage at a show in Germany and Prince thought Mayte’s belly dancing skills were on point, but he didn’t dare touch her with a ten foot pole until she became a woman at 18 -smart move Prince! That’s also when Mayte became the primary dancer for his shows and joined his New Power Generation band.

They started dating when she was 18 and he was 34…four years later they were at the alter joining in “bizarre,” yet loving holy matrimony. Prince also based his entire “Love Symbol” album around Mayte and created the song “The Most Beautiful Girl In The World,” specifically about her. 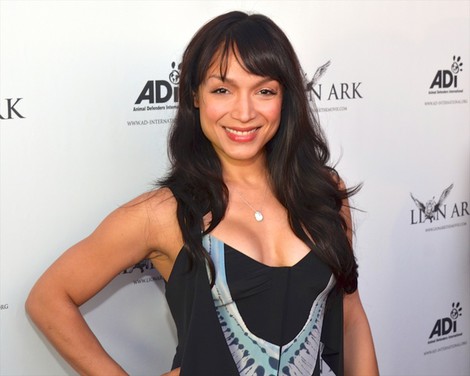 Mayte did an interview where she revealed several “bizarre” things about their relationship that will make you laugh and cry at the same time, including the fact that Prince never took off his short “stiletto heels”- not at home, not ever! Prince is 5’2″ and Mayte is 5’4″, so maybe he was compensating for that, who knows? She also said that she never called her then-husband, Prince, any name because during that time he was nameless and had simply changed his name to a symbol; she said the relationship with Prince “screwed up” her relationships after him; and she also talked about the very tragic time when they’d lost one of the two babies they eventually lost, but that they went on the “Oprah Winfrey Show” and pretended their precious baby was still alive when they talked to Oprah about him. See what else Mayte revealed below…

“When we met I was a virgin and had never been with anybody,” [Mayte] reveals. “I’d always been a very focused dancer and very protected. Prince was my first crush, and my first love, but we didn’t start to get serious until I turned 18. He was very respectful.

“I remember our first kiss, and thinking, ‘Oh God, oh wow, this is not happening!’ I remember it being overwhelming and weird. Our entire time together was amazing and surreal, and he showed me some incredible things and introduced me to incredible people.”

On comparing Prince to other men she’d dated afterwards:

Mayte says: “All the songs he wrote for me, that’s a pretty hard act to follow. I’ve dated a couple of guys, musicians, who have written me poems or songs and I’m like, ‘Seriously, don’t even go there. You can’t compete!’

“But I think I’m now screwed for life because my first relationship was the most bizarre relationship ever and I’m not normal any more. I’ve kind-of been spoiled and I guess I am kind-of screwed-up now.” 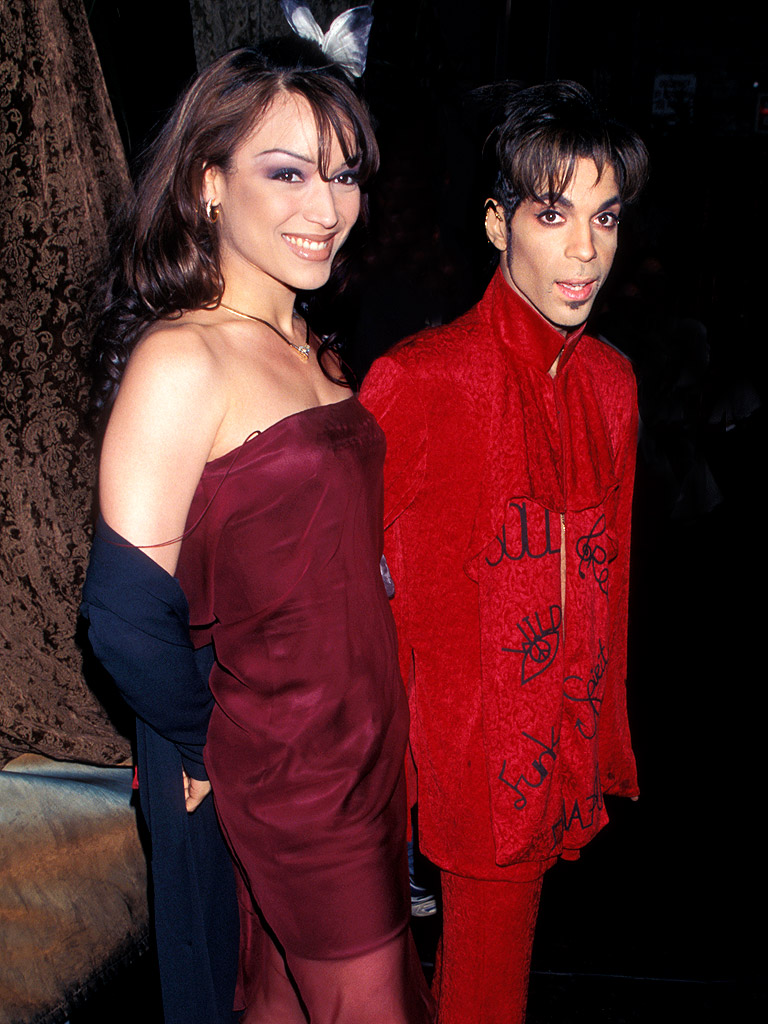 After they married in 1996, Mayte got pregnant almost instantly. Unfortunately their son, Boy Gregory, passed away at just one week old due to a very rare birth defect called Pfeiffer syndrome, which is a defect of the skull. Soon after that, she became pregnant again and had a miscarriage and both of those incredibly painful losses are what began to tear their marriage apart.

Mayte explains: “To lose two babies is really scary… it really caught on me emotionally, physically, everything. It took me at least 15 years to get over it and still, to this day, I miss my son. I believe a child dying between a couple either makes you stronger or it doesn’t. For me, it was very, very hard to move forward and for us as a couple I think it probably broke us.” 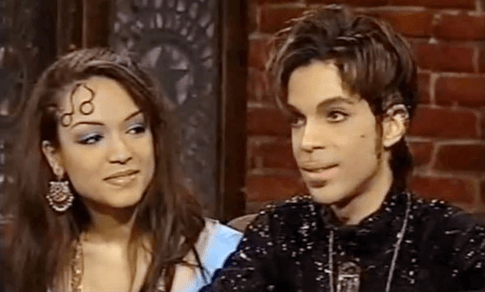 Bizarrely, within days of losing their son the couple went on the Oprah Winfrey show and pretended he was still alive. She says now they were simply unable to process the death..

“We had to show people that we were strong, that we had faith, and that we would try again. But I didn’t really want to speak to anybody. I was physically distraught. When you miscarry your body is freaking out, like ‘Why can’t I feed the baby?’ so those were the things I went through. Every day was a struggle even to breathe.” 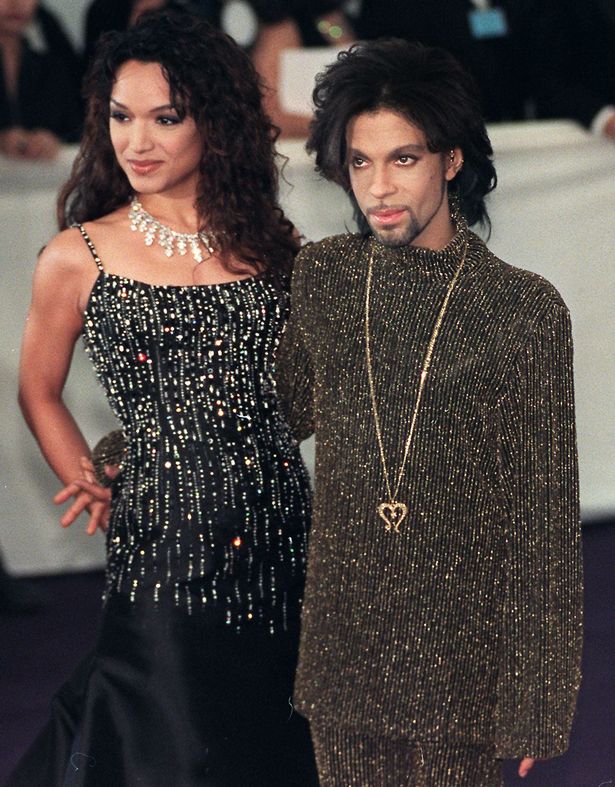 Mayte on never addressing Prince by any name:

“We never had any pet names, and I don’t think in the whole time we were together I called him anything, which I guess is a bit weird,” she confesses. I never called him Prince because I wanted him to be a person to me, not the man behind Purple Rain. Plus, technically, I was married to the Symbol. Our house was full of them, but I just couldn’t say the word. When we got married it was much easier. If someone else was there I could say, ‘Could I speak to my husband please?’ ”

Neither did they ever go out on a date. “I doubt any woman ever has… he’s not really a cinema kinda guy,” she says. And then Mayte revealed how Prince rocked his high heels 24/7…even in the comfort of his own crib, but she also said that lack of confidence about his height was never an issue for him…

“When I was with him he always wore these little stiletto heels – I don’t know what size he was but I could put my feet into his shoes. But I never felt his insecurity in height. You didn’t see it because he was who he was. He’s also really, really, really funny, which most people don’t realize. This is why so many people fall for him. Prince never, ever mentioned it except to say he wished he was taller so he could play basketball. He was actually a really great basketball player.”

Okay let me pause for second and point out that I can’t help but think about the infamous “Chapelle Show” episode when Charlie Murphy told the story about the time they played Prince and his crew in a game of basketball. Chappelle was playing Prince and he named Prince’s team was “Blouses” LOL. Okay we digressed, let’s get back to Mayte… 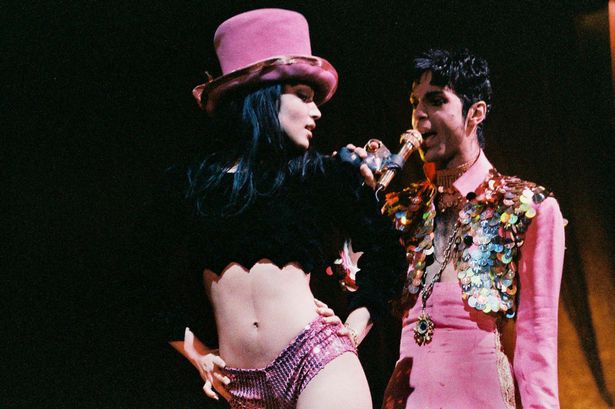 With a music studio and nightclub inside the marital home, their daily routine was a world turned upside down, going to bed at 6 or 7am and not surfacing until past midday.

“Sleep is over-rated,” laughs Mayte. “When you’re creating, traveling and having the best time of your life the last thing on your mind is sleep. Often we would play an arena then there would be an aftershow, and afterwards you’re not tired because you’ve got so much adrenaline going. We didn’t have cellphones then, and we never wore watches, so time was just never something we would think about. We were our own creators, and he didn’t have anyone to report to. I loved his energy, his charisma.”

She adds: “We last spoke about five years ago when I reached out to him. There is no animosity or bad blood, and he was my husband and the father of my child. So although I am not actively in love with him, I will always love him – he’s a great guy.” This isn’t the first time we’ve heard one of Prince’s exes say something was a lil’ strange about their relationship. Back in the day when Prince was dating actress, Carmen Electra, she admitted that she had to sleep in full makeup every night because he loved seeing her look like a sleeping beauty so to speak.

That Prince is something else I tell ya,’ but he’s still a musical genius and as we all know, the term ‘genius’ is on the borderline of having a lil’ bit off crazy mixed in too. Prince fits that definition perfectly and we can’t be mad at him for that at all, do your thing Prince!