Aretha Franklin Issues Public Apology To The Pope For Doing This…

When Aretha Franklin performed at the Festival of Families in Philly this past weekend (9-26-2015), she caught some backlash for not doing this one thing for the Pope. She forgot to greet him when she stepped on stage where he was sitting before she sang “Amazing Grace” to the massive crowd there to enjoy the festivities and see Pope Francis in person.

People blasted Aretha on social media after noticing that all of the other performers of that night- including Sister Sledge, the festival’s emcee Mark Wahlberg, and others- greeted the Pope either before they started their performances, or immediately after prior to exiting the stage. 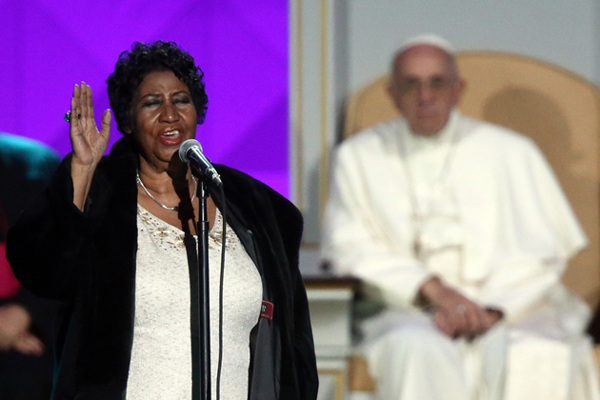 Yesterday (October 1, 2015), ‘Queen ReRe’s’ publicist released this statement to offer her version of what happened and to publicly apologize to the Pope for any perceived disrespect on her part:

It doesn’t sound like Aretha meant to diss the Pope on stage, it just sounds like she was in her zone and doing what she does best – taking folks to chuuurch and wowing the crowd like only Ms. Aretha, the ‘Queen diva’ can. Maybe the social media world will cut her some slack once they read her apology.

Do you think Aretha did the right think by apologizing?