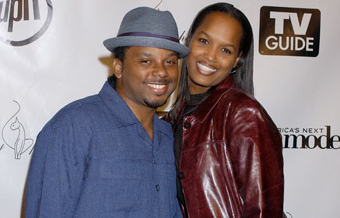 There was an incident where Landon's real mother, Melika Williams, and Whitney were both together. Landon calls both of them mom but felt really uncomfortable calling Whitney mom in front of his real mother. Torn between not wanting to hurt either one of their feelings, this is what Landon did instead: “I playfully called her (Whitney) ‘lady.’ I was like, ‘Hey lady, you want some cake?’ I just wasn’t sure if I should call them both mom or if that would make my mother feel a lil uncomfortable. I thought it was nothing until she called me later that night after the festivities asking why I didn’t call her mom. I was a lil shocked. I thought it was a strange moment, but nothing she’d remember. I felt like a jerk! I still didn’t know what I should’ve done in that situation, but for some reason I felt wrong. I know it really hurt her when my sister called shortly after asking what had I done cause [Whitney] was upset. I explained what happened and my sister laughed at me and told me you should’ve just called her mom you know you have more than one! That made me really feel terrible that my youngest sister saw the answer so clearly! I love my mothers and my siblings and I would never want to be the guy to slander their names.” [AlwaysAList] Throughout it all Landon and Whitney were still able to move past that hurt and go back to a normal Mother/son type of relationship. Landon loved Whitney dearly, just like he loves his real mother and that is a bond that no matter what happens, can never be broken. May his beautiful step-mother and lil' sis' continue to rest peacefully.