built his entire political career not wanting most people to know who his father is. Typically that would seem kind of hard to do when you have your multi-platinum selling Dad’s name and you look like him, but apparently he’s been able to pull it off. According to tnj.com,

[quote_box_center]Larry Scott Blackmon was determined not to exploit the name of his father, Larry Blackmon, “I never wanted anyone in politics to say I achieved anything because of my father,” he says. Blackmon lived with his grandparents in Harlem from the time his mother died when he was 12, but he often joined his father on the road with the band.[/quote_box_center]

Larry Scott graduated from the State University of New York at New Paltz in 1996 with a B.A. in liberal arts, and has a master’s in Public Administration from Metropolitan College of New York. He’s a political consultant who is in high demand within the New York political circles. He’s worked with everyone from former NYC mayor, Michael Bloomberg for his successful re-election campaign, to the New York Jets, to Hillary Rodham-Clinton (when she was a senator). Larry Scott Blackmon’s also worked at EMI Records and Island Black Music from 1996 to 1998, then launched his own independent promotions firm. 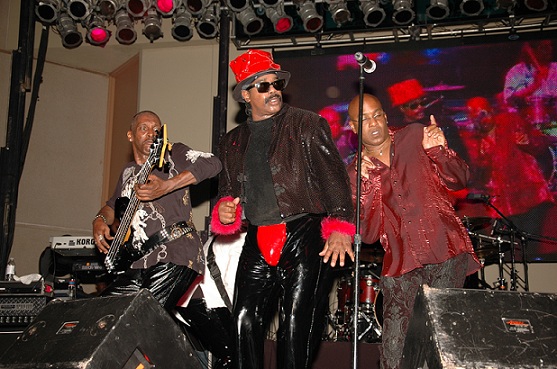 Now as far as his Dad, the man we all know as the lead singer of Cameo, he’s still wearing his red cup and selling out venues across the country. If you haven’t had a chance to go to a Cameo show lately, check it out if one comes to your your city, because they can still throw down on stage. Maybe one day we’ll actually see Larry and his son, Larry Scott, photographed in public together, but for now it appears that the two prefer to stay separated when they’re in the public’s eye.

Click ‘Next’ to see a recent performance by Cameo…