Coko Of SWV Was Disrespected By K. Michelle? Oh Boy, Things Got Ugly! 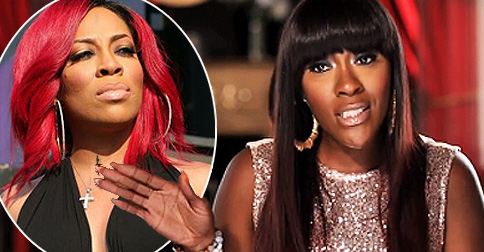 If there is one thing that’s usually guaranteed to get a new singer in hot water, it’s when one attempts to disrespect an Old School artist who has far more accolades than them and who has also paved the way to help them get their foot through the narrow crack of the music industry’s front door.

Singer, K. Michelle, has disrespected one of the powerhouse singers of the 90’s, Coko Clemons, of SWV and people didn’t take too well to that.

As you may recall, K. Michelle performed Patti LaBelle’s “If only You Knew” along with singer Tamar Braxton and Patti at the 2015 BET Awards. There were mixed reactions from the public regarding K. Michelle’s and Tamar’s performance- some people were attempting to be as polite as they could be and some were just letting their raw dislike show, but just about everyone agreed that Patti shut it down and that K. Michelle and Tamar didn’t stand a chance singing next to Patti.

The tide has now shifted and many people aren’t going so easy on K. Michelle. Know why? Because she decided not to go so easy on Coko on Twitter yesterday.

Here’s what happened between Coko and K. Michelle on Twitter over the past couple days: Coko re-tweeted several fans of her’s who where expressing that they…