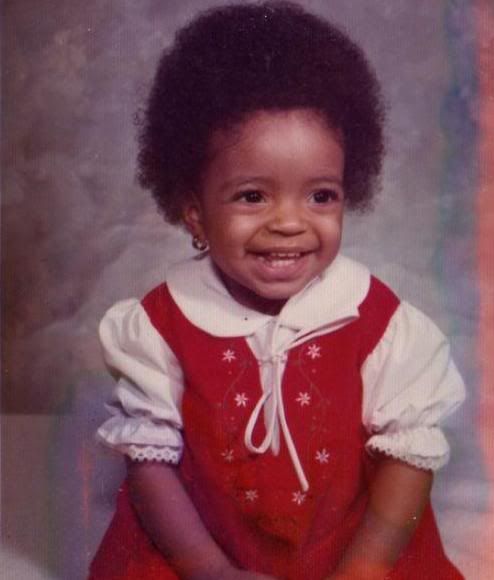 This little cutie patootie grew up to be a BAD singer. She was really popular in the late 80’s and early 90’s era and her voice is very melodic and beautiful. She has been nominated for a Grammy and she’s sold millions of albums throughout her career. Here’s one last hint, she’s covered many songs of some of the greatest R&B singers around and she’s no stranger to making her life public.

Look closely at her cute little cheeks and see if you can figure this one out. The answer is below…

She is Shanice Wilson! Did you get this one right family? Is it just me or is it every time we see Shanice, we always feel like singing “Do,do,do,do,do,do,do,do…do,do,do,do,doo,do,do,do….I love your smile.” That was the jam back in the day wasn’t it?!!

Shanice had plenty hits throughout the late 80s and 90’s and I’m happy that she’s back on the scene recording new music. In case you haven’t heard, Shanice, her husband, actor/comedian Flex, and her entire family…well maybe not her whole family, but it’s a bunch of them, were living under one roof and had a reality show on Oprah’s OWN network, titled Flex and Shanice.

On the show, we get to see how Flex and Shanice are rebuilding their careers after being out of the spotlight for a minute. They revealed, in a heart breaking confession on their reality show, that they were struggling really hard financially for a while, but that the show has helped them to start getting some things back on track. We also got to witness them doing their thing, such as seeing moments of Shanice recording in the booth like this…

As you can see, our girl ain’t rusty at all in the singing department! It seems like it was just yesterday that we were watching 11 year old Shanice cut up on Star Search singing Whitney Houston’s “The Greatest Love Of All.” Remember that? If not, here is her 1984 Star Search performance… Soon after her Star Search appearance she was scooped up by A&M Records, signed to a record deal, and it was on ever since for Shanice.

Other than performing, Shanice also has an adult onesie line that sells onesies for those who like to keep it warm and cozy all day.