Is This The Cryptic Tweet Nick Gordon Posted After ‘Toxic’ Cocktail Accusations? 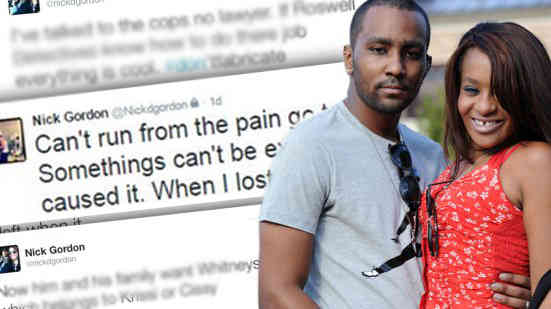 Is it a cry for help, a message of grief, or a young man lost in this turmoil of fame, money, life, love and death? We won’t know until it’s all said and done, but Nick Gordon posted a cryptic message on his Twitter account Sunday just a day after he was accused of giving her a “toxic” cocktail the day she was found unconscious in a bathtub at her Atlanta home.

“Can’t run from the pain go towards it. Somethings can’t be explained what caused it. When I lost you I lost it,” Gordon wrote on his Twitter account. In another Twitter post Thursday Gordon remembered his late girlfriend, saying: “When you would do anything in the world to spend 5 min with her again.”

The court documents claimed that Gordon caused the death of Whitney Houston’s daughter because of “a violent altercation . . . after which he placed her in the bathtub unconscious, after he injected her with a toxic mixture.”

“The criminal investigation involving possible charges in this case is ongoing, no arrests have been made, and disclosure of the autopsy report and the above-mentioned information at this time would compromise the integrity of the investigation and create a risk of flight in possible defendants, and could pose a danger to witnesses involved in this case,” the filing, obtained by WSB-TV, stated.