Raven Symone Does It AGAIN! See Why Black People Want Her Fired NOW! 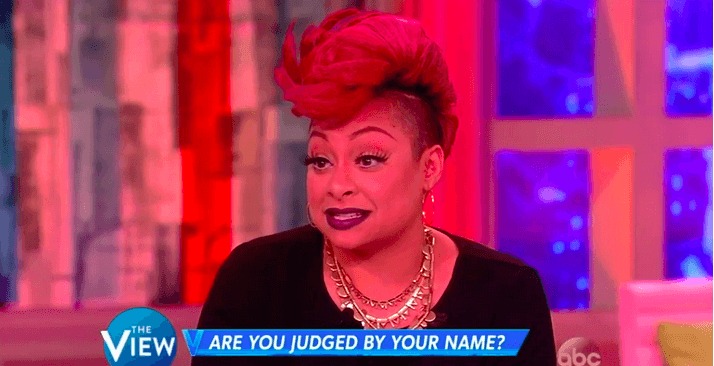 names and the African inspired creativity behind some of them. During the discussion the hosts were having on The View, the topic of names came up, in particular, what many would consider to be Black people’s names. Raven has a thing against certain “types” of Black people’s names and so this is what she said:

“Just to bring it back, can we take back ‘racist’ and say ‘discriminatory,’ because I think that’s a better word. And I am very discriminatory against words like the ones that they were saying in the video. I’m not about to hire you if your name is Watermelondrea. It’s just not going to happen. I’m not going to hire you.”

The look on Whoopi’s face after Raven said that is PRICELESS. Watch it below…

Although Raven made her comment in a joking manner, she was still speaking how she really feels and her real feelings were offensive and borderline self-hatred filled.

To discriminate against a person simply because their name is a decision that their parents chose to make, is very vain and close minded. Although I understand that Raven is stating that she wants a very professional group of people on her team, her method of choosing which person fits her mold is very one sided.

To Raven’s credit, I do understand that some names may sound a little over the top with the creativity, but NO ONE deserves to be judged by something so superficial as a name, when it’s the content of the character that makes the person, and in the case of a work environment, it’s also the depth of the person’s work ethic and their knowledge of the job at hand that really counts more than anything, right?

Raven’s got some explaining to do.