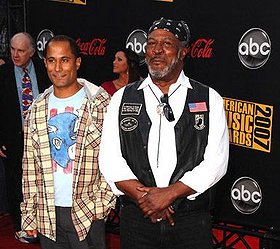 He’s a people person who usually finds himself walking into a special moment. There was one occasion recently where he walked backstage on Broadway to greet Tom Hanks. Well, Tom was so glad to see him that he broke out singing the popular jingle from a classic McDonald’s commercial that my dad starred in some years ago. Tom expressed that it was that commercial that inspired him to pursue acting as a child.

I think that his advice in my life has helped me discover who I am and my passion for directing and production work. After watching him work in front of the camera on a live TV show or a film shoot, I became fascinated with cameras and directing. He made a cameo appearance in a new feature film that I recently co-directed and produced titled, Mercy for Angels.

The film takes on the subject of human trafficking in America. This is a cause that me and Pops are passionate about. We want to assist the efforts to bring change through awareness and hopefully help to end this crime against humanity.

We are also working to make his renowned theatrical play Halley’s Comet into a feature film. The play tells the story of an old man who sees Halley’s Comet for the second time since his childhood. It’s a touching project that has some great lessons in it.

I would have to say that the most amazing thing about my dad as a father is that he has taught me to discover my passion, develop it, and give it back in a way that will hopefully make a difference to the lives of others. For that, he is my hero.”

So there ya’ have it ILOSM family, John Amos was great Dad on T.V. and in real life, which is always a beautiful thing. We give props to John Amos for being what he is supposed to be- a father to his children and for being a good example of what a real Dad looks like through his on-screen performances. That meant a lot for many of us who may not have had a male role model to look up to in our own households.

Click here to find out an Old School fun fact about him that you may not know.