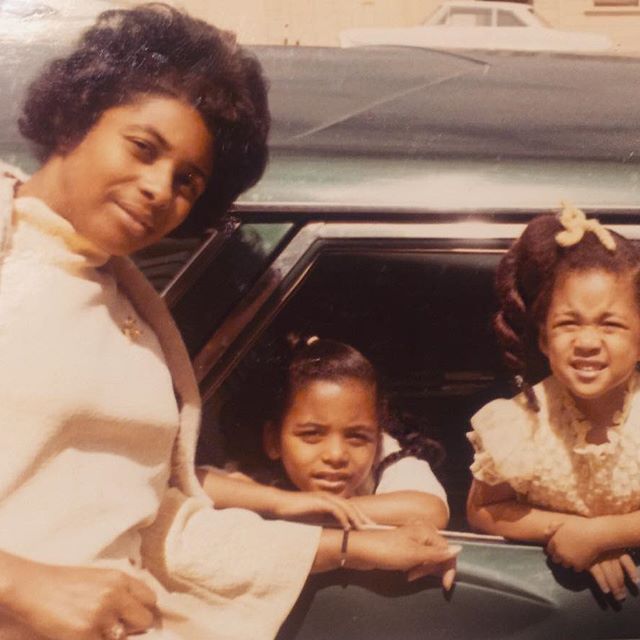 The little girl (on the far right) chillin’ in the car with her sister (and her mother), is now a popular singer, who first hit it big in the 90’s. From slow jams, to mid-tempo joints, she had radio on fire for a while. She’s even dabbled in the reality show world for a few years.

If you guessed that the adorable little cutie in the above photo is none other than Chante Moore, then you guessed right. Give yourself a handclap for being on point with that facial recognition, because that was NOT an easy guess.

By the way, Chante’s sister’s name is  LeTendre’ and she’s pictured below…

What’s Chante Up To These Days?

Nowadays, Chante is currently promoting her latest album, “The Rise of the Phoenix,” and she chopped it up with Rolling Out about it:

via RO: I wrote about it. After six years of being single, I got a man … for real. My single “Real One” is out right now. It’s co-written by me and Lil Ronnie. My album is about love, travel and relationships. It’s titled The Rise of the Phoenix and it’s indicative of how I feel right now, emerging from the ashes and everything in my life, positive and negative.

Chante’s Also Got A Man Now

Although Chante was previously very public with her last known relationship, with former Soul Food series actor, Darren Dewitt. These days, she confirmed that she does have a man, but she’s keeping his identity under lock and key. So we’re not sure if her man is still Darren, or if Chante’s got a new boo-thang, but the good thing is that Chante’s ‘got a man’…get it? Good. Anywho, check out what Chante had to say about her current man…

RO: How did you get to a place where you could love again?

Chante: I fought it the whole way. It took persistence. I gave him a really hard time. He’s funny and makes me smile. He has his own life. He isn’t intimidated by my life, career and history. I have been married before, but I know what I want.

RO: How important is your privacy with this relationship?

Chante: It’s important. Even with friends and family in your circle, they can be too close. It can be too much. If you are unsure, you can open too many doors for other people’s opinions. Don’t allow people to rule your life because you are the one who has to live or not live with that person. […] He’s the right one for me when he’s in my space and he makes me happy. He is loyal, kind, faithful and makes me feel beautiful. He makes me feel loved and we’re friends. That’s important, too.

Chante’s previous marriages to actor, Kadeem Hardison, and singer, Kenny Lattimore, didn’t work out. However, she is grateful for the two wonderful children (one each) she has with both of them.