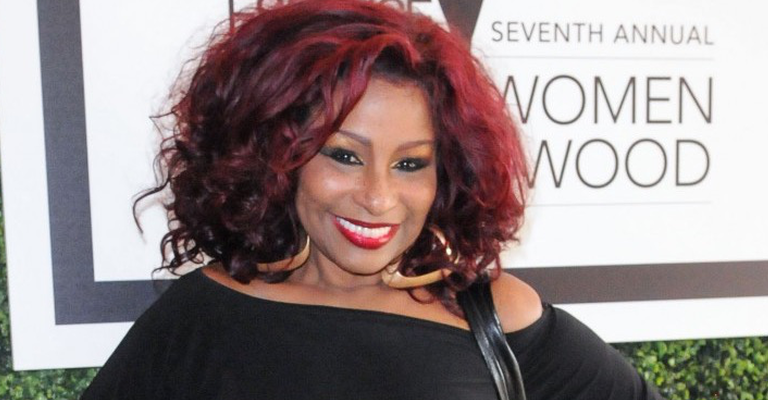 We love us some Chaka Khan, here at ILoveOldSchoolMusic, and just as much as we love her beautiful voice, we also love her inner strength. She’s been a survivor in the midst of several adversities within her life. As most of us know, she and her sister/singer, Taka Boom, recently completed a rehab stint, during which time Chaka revealed that her good friend, Prince’s, tragic death scared the living daylights out of her. Chaka was reportedly addicted to the same prescription pain med, fentanyl, that Prince accidentally overdosed on in April 2016.

And just like the rest of us, no one is perfect…that fact goes for Chaka’s son, Damien Holland, as well, who has also had his fair share of struggles throughout the years. Chaka shared rare photos of Damien and his daughter, but before we get into their pics, I wanna point out that there may be a reason why most of Chaka’s fans know all about her beautiful, talented singer daughter, Millini Khan, but don’t know much at all about her son. It could be because for the past decade or so, Damien, too, has had a reported drug addiction and has stayed out of the public’s eye. However, there were times when Damien could not dodge the public scrutiny though…

Murder Trial
In 2006 Damien stood trial for the murder of his former friend, 17 year old Christopher Bailey, after shooting him inside of Chaka Khan’s L.A. home. Damien was adamant in his claim that the shooting was an accident and Chaka testified on his behalf. He was ultimately found not guilty.

Custody Of His Daughter Granted To Chaka
By December 2011, Chaka was granted permanent custody of Damien’s then 10 year old daughter, Daija (who is 17 now), and Chaka’s sister Tammy McCrary, was granted full co-custody. This happened after Chaka told an L.A. Superior Court County judge that Daija’s mother was reportedly unfit to be a mother at that time, due to her alleged heavy drug addiction. It later came out that Chaka’s son, Damien- who lived in his mom’s home with his daughter’s mother- was also reportedly heavily addicted to drugs then as well. In the September 2011 initial custody filing, Chaka stated that she had already “assumed on a day-to-day basis the role of the child’s parent fulfilling both the child’s physical and psychological needs for care and affection.”

2015 Arrest w/Reality Show Friend
In December 2015, Damien Holland made headlines again when he and his oil heir millionaire friend/Celebrity Rehab reality show star friend, Jason ‘Gummy Bear’ Davis, were reportedly arrested in Beverly Hills, CA for driving a stolen Audi Q5 and identity theft. But ever since then, Damien has obviously been living life on the straight and narrow… 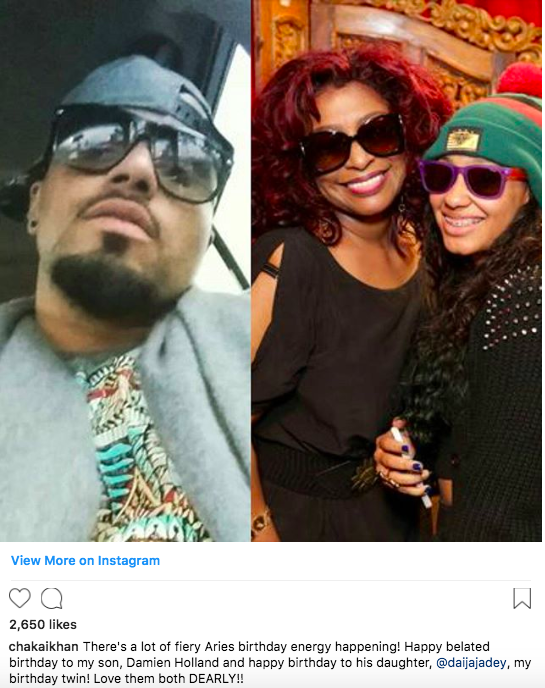 After learning of the life struggles Damien Holland has experienced, it’s understandable why- when we fast forward to today- Chaka is photo’d (above) with her grandbaby, Daija, smiling from ear to ear and happy as can be about her son. In March (2017) Chaka posted a Happy Birthday wish to both Damien and his daughter, Daija…all three of them celebrate their b-days in the same month. Needles to say, the sight of Damien shocked the hell out of her fans.

Some fans never even knew she had a son, while others were pleasantly surprised that his typically hidden presence was revealed.

Chaka Khan has a lot on her plate right now, but she is “every woman,” who is clearly earning that title more and more everyday. She’s a 65 year old mother of her teenage granddaughter, a hands-on grandmother to her other younger grandkids, a very actively performing singing legend, and a continued work in progress from her own past addiction. Through it all, we still love Chaka and wish her continued success with balancing her day-to-day ‘hats.’